A weekly guide to FantasyScore's Salary Cap and Draft-and-Go contests.

Continuing last week's theme, I'm once again going to start off with an analysis of whether or not my value probabilities are well-calibrated -- this time for running backs. For those who missed last week's piece, the general issue at hand here is that, when a statistical probability model predicts that something will happen X% of the time in the future, it should happen X% time in the future. For instance, if I told you that 10 different running backs had around a 20 percent chance of achieving cash game value on FantasyScore last week, then, what we would want to see when looking back at what actually happened in Week 11 is that two of those backs achieved value (i.e., 20 percent), while the other eight did not. Obviously, 10 is a really small sample size, but we can extend this methodology as far back as we we want, provided we have data related to what was predicted in advance and what actually happened.

With respect to running backs, however, there's a not-so-small complication that didn't exist for quarterbacks. Namely, whereas the game-by-game scoring of quarterbacks resembles a symmetric bell curve whereby the majority of scores are around the league average, with diminishing frequencies as you move away from the average, running back scoring doesn't resemble a bell curve at all. To wit, here's a graph showing how often various FantasyScore point totals have occured among the weekly Top 50 running backs since 2007: 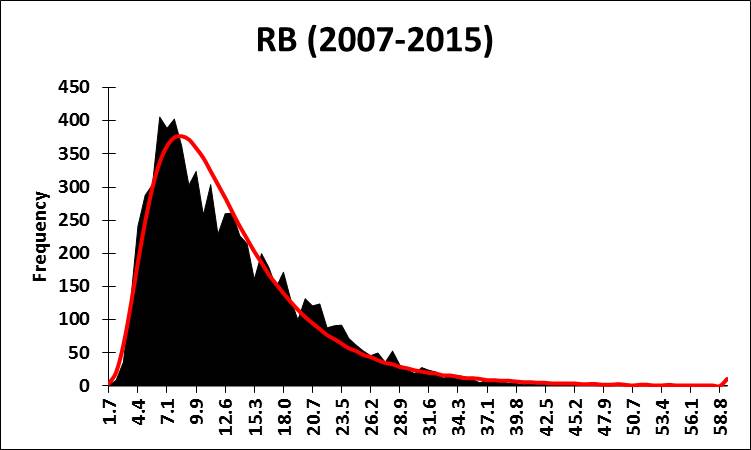 Right away, you can clearly see from the red line that the curve is not a symmetrical bell shape. Rather, it's a bell that's had it's right side caved in, thereby pushing the vast majority of scores over towards the lower end of the spectrum. This "caving in" has major implications for calculating how often a particular point total occurs.

I won't get into the technical details, but the gist of it is implied by the black shaded portion of the graph. But just so we're on the same page, we should intrepret the height of the graph at 7.1 points as saying that that score (or so) has happened about 400 times since 2007 (or around 5.4 percent of the time). Similarly, 23.5 points (or so) has happened only about 100 times (or around 1.4 percent). With that basic understanding, we can move on to a more important question for the purposes of calculating value probabilities; something like, "How often have these backs scored anywhere from 0.0 to 23.5 points?" To answer this, we simply add up all of the black shading from 0.0 to 23.5 points, which results in a frequency of 6,697, or 91.1 percent of the time. Stated differently, the answer is (equivalently) that only 8.9 percent of the shading lies greater than 23.5 FantasyScore points.

Hopefully, I've set the stage well enough that you have an inclination of where I'm going with all of this; which is that, unlike at quarterback, I can't compare running back value probabilities to actual running back scoring using a bell curve. Instead, I have to use what's called a lognormal curve, which is the statistical representation of a caved-in bell and which was represented by the red line in the above graph. 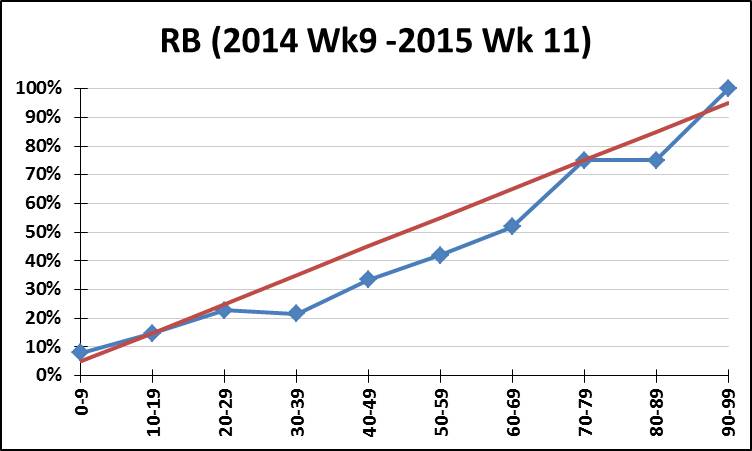 Remember, the underlying math has changed, but the goal of this graph is the same as it was for quarterbacks: When my fancy mathhas predicted that some group of running backs had an X percent chance of achieving value, X percent of those running backs should have achieved value in retrospect.

And indeed, although there's room for improvement, that outcome seems to be the case: For the most part, the blue line (i.e., actual probabilites) adheres to the red line (i.e., expected probabilities). On the plus side, the two lines are closest at lower probabilities, which corresponds to a) the story of the caved-in bell that I just told you, and b) the highest sample sizes of the bunch. Nearly 1,200 of my cash game value predictions were in the 0-29 percent range, whereas not even half that were in the 30-99 percent range. On the negative side, the inaccuracy from 30-49 percent is troubling to me because it represents just over 400 predictions, and so sample size shouldn't be an issue. That's definitely something I'll be exploring and (hopefully) refining during the offseason.

OK, so here are the main take-home messages from what you just read:

Below are the quarterbacks with the highest (and lowest) probabilities of achieving value in cash games and GPPs:

McCown is the clear value play, especially in GPPs. He's at home against the 27th-ranked pass defense (per DVOA); 24th against tight ends. Earlier in the season, he scored 38.1 points against Baltimore. According to Pro Football Focus, his No. 1 receiver has one of the best individual matchups of the week. This game has the lowest over-under in Week 12, but McCown only needs 18.0 points, and he's scored 17.9 or more in five of six games since suffering a concussion during against the Jets in Week 1.

Brees is an overwhelming underdog to achieve value in GPPs, but I could see it happening because, with Vegas predicting a high-scoring, close game, and with New Orleans' defense being god-awful, I can easily envision a scenario in which Texans-Saints turns into the proverbial tit-for-tat shootout. Is it likely that Brees scores 34.8 points to achieve GPP value? No. Does that scenario have more than a 1.5% chance of happening? Perhaps.

Below are the running backs with the highest (and lowest) probabilities of achieving value in cash games and GPPs:

What with non-Freeman Falcons running backs and non-Foster Texans running backs showing anything worth trusting this season, the value play in Week 12 is Draughn. He only needs 12.0 points to achieve both cash game and GPP value. What with Blaine Gabbert's proclivity for dumpoffs whilst San Francisco gets slaughtered and the generosity of Arizona's defense to pass-catching backs, Draughn has a good chance of scoring that much via receiving alone.

Speaking of that game, I can see Chris Johnson achieving value despite his low probability, especially in cash games. He scored 27.0 points in the teams' matchup earlier in the season, and San Francisco's defense is Bottom 4 in both defending the run and defending opposing running backs in the passing game (per DVOA).

Below are the wide receivers with the highest (and lowest) probabilities of achieving value in cash games and GPPs:

I'm all-in on Tyler Lockett this week. Whereas Doug Baldwin has lined up in the slot over 80 percent of the time (per Pro Football Focus), Lockett moonlights all across the formation -- and that gives him more opportunities to exploit William Gay and Antwon Blake, the latter of whom has been especially bad in coverage this season. In addition, Seattle's pass defense has given up ample yardage to opposing quarterbacks that are the least bit competent, which means that the normally run-happy Seahawks offense could easily find themselves in a tit-for-tat scoring affair a la what I said earlier about Texans-Saints.

On the "least likely" side of the table, everyone makes sense, both in terms of wide receivers to fade and wide receivers to not fade. All of them either have really bad matchups or are priced too high (or both).

Below are the tight ends with the highest (and lowest) probabilities of achieving value in cash games and GPPs:

This marks three consecutive non-bye weeks in which Tye has had the highest probability of achieving value. He's currently 1-of-2. Per DVOA, Washington's pass defense ranks 26th overall and 20th against opposing tight ends. If you want to ride the Tye-ger, go for it.

And if I'm going to buck my own trend among low-probability tight ends, it'll be with Gates. Jacksonville's pass defense ranks 30th overall and 30th against opposing tight ends. In addition, this game has the 3rd-highest over-under of Week 12, and San Diego is the 5th-most pass-happy offense in the league this season.

Below are the defenses with the highest (and lowest) probabilities of achieving value in cash games and GPPs:

On the "most likely" side, I'll steal a joke from fellow Footballguy Phil Alexander's piece earlier this week:

Although there really is no "unlikely" on the "least likely" side, I think it's safe to say that Cincinnati hosting St. Louis, a team that seems to only play well within their division, is the best value play of the trio; provided the Bengals can slow down Todd Gurley, of course. It turns out that run-happy teams and/or teams with elite running back talent have found success on the ground against them this season. The Rams and Gurley qualify on both accounts.

Finally, to supplement the statistics-based strategies I recommended earlier in the season, here are the VBD draft lists you should use for FantasyScore's Draft-N-Go (DNG) games: