Dynasty, in Theory: Many Happy Returns

You shouldn't buy low and sell high because we're bad at knowing whose value will go up and whose will go down. Except for this guy. His is definitely going up.

Welcome to the first Dynasty, in Theory column of 2017! For new readers, this is a place where I write about aspects of dynasty fantasy football that are a little bit more abstract or conceptual.

The goal is a column that is less concerned with the who or the what, and more about the why and the how. I'm not trying to give specific, actionable advice that will help in the short term so much as I'm trying to build a conceptual framework on how to succeed in dynasty over the long term.

What I love about this format is that, by zooming out, we can create concepts that actually build on themselves over weeks and even over years. And today that's exactly what I want to do. Using past ideas, I want to build a case that David Johnson is the safest investment in all of dynasty right now. More importantly, I want to discuss why.

The Case for Johnson

To start with, I'm not ordinarily a fan of buying low and selling high. In 2015, I even went so far as to write:

Because to me, the idea of buying or selling just based on what a player’s value has done recently misses the point entirely. I think people need to stop trying to buy low and sell high entirely.

Kareem Hunt was a 3rd-round pick in the NFL draft and a late 1st / early 2nd round pick in rookie drafts this summer. He then set an NFL record for yards from scrimmage in a player's first NFL game. His price today would be substantially higher than that; if owners were to redo their rookie draft, some might take him as high as #1 overall, and I suspect his current ADP would settle in around 1.04 or 1.05 along with Dalvin Cook and Joe Mixon.

If you traded Joe Mixon today, would that be an example of buying low on Kareem Hunt? After all, his price has gone up, but if he's as good as he looked against the Patriots then three years from now we'll consider that a huge bargain.

And this is exactly my point. “Buying high” and “selling low” aren't questions of what a player's value has done recently. Kareem Hunt's value can rise and he can still be a buy low. It's all about what his value is going to do in the future.

And we're really, really, really bad at guessing what a player's value is going to do in the future. At any given moment, I'd say a player is as likely to underperform his market value as he is to overperform it. I mean, that's why it's the market value; the market usually does a pretty good job of setting prices that appropriately weigh the risks and the rewards.

Of course, the week after I wrote that piece, I contradicted it. To quote myself again:

My problem with buying low and selling high is that it’s exceedingly difficult to time the market. I feel like a giant asterisk is needed on that statement, though, that reads *except in the case of rookie picks and injured players. I wrote an entire article about how I knew for sure that injured players would see their value rebound. Here’s a graph from that article, courtesy of Ryan McDowell of DynastyLeagueFootball.com. (Follow him on Twitter at @RyanMc23!) 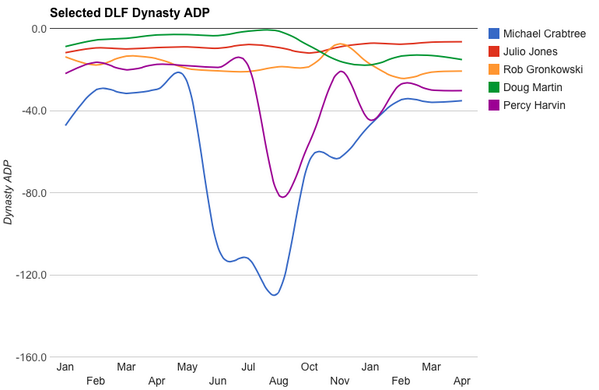 Not all injured players drop in value. But the ones who do fall hard and fast. Look at that plunge! More importantly, look at that rebound! When a player’s value falls precipitously after an injury, it’s a virtual lock that it will rebound in the months afterward, regardless of what the player actually does during that span. Percy Harvin re-injured himself during that stretch, and what happened? A second value plunge and a second value rebound. Short of retiring, there was virtually nothing he could do to not recoup his lost value.

So no, I don’t believe in buying low and selling high. But if you do, here’s your chance. Buy injured players, hold them through the season, and then sell them afterwards. There are easy profits to be made.

The key here is that not every injured player sees his value crater. More importantly, dynasty isn't a massive global market, it's a series of leagues, each of which is a self-contained market. Just because Percy Harvin's value cratered overall doesn't mean it cratered in each specific league.

(Meanwhile, just because Julio Jones' value barely budged after his injury doesn't mean it stayed constant in every individual league. I had a league in its first year in 2013 where I acquired Julio, drafted 7th in the startup, for Jordy Nelson and Danny Woodhead, drafted 33rd and 177th. I find that mock drafts tend to underestimate the value drops in actual leagues, where owners are faced with the pressure of setting a weekly lineup.)

The point is that when an injured player's value does crater in the immediate wake of an injury, it is almost certain to rise again. There's no guarantee you can get David Johnson at a big discount right now. But there is a guarantee that, if you can get him at a discount, he's going to see a big increase in value over the next 9 months.

But Johnson is essentially free of those major risks. Arizona has no promising young prospects behind him on the depth chart; they were so strapped at running back they were forced to entice Chris Johnson back out of retirement.

Meanwhile, the timeline on David Johnson's injury should leave him able to return in 2016, and 2017 shouldn't be the slightest bit at risk. And unlike lower-body injuries, which have the potential to wreck a back's explosiveness, there should be no lingering effects on his quality of play.

This isn't to say that David Johnson shouldn't be cheaper today than he was a week ago. I'd estimate that his injury might have cost him 20% of his career fantasy value. That's not good. But most owners don't value players like that. Some of the trades I've seen going through indicate that, in some places at least, Johnson costs half of what he would have cost a week ago, and he certainly hasn't lost half of his career value.

Moreover, once Johnson is healthy and looking good next offseason, I suspect that owners won't pay much attention to the fact that he's a year older than he is today. I'd wager with a high degree of confidence that, barring additional injury, Johnson will be valued next August very close to where he was valued this August. And if you buy him today, all of those gains are pure profit.

Finally, you might have noticed the weasel words in that last paragraph: “barring additional injury”. But that's really the best case for buying David Johnson; he's far less likely to get injured simply because... he's already injured.

Johnson probably isn't going to tear his ACL on IR. He's not going to get a concussion or break his collarbone or lacerate his kidney. Heck, Johnson might not play again this year, which means he won't have a chance to have any bad games, and if he does, he already has a ready-made excuse. There's virtually nothing he can do to make us think less of him as a player in the next nine months.

But the players you could trade for Johnson? That's not the case. Even if you valued David Johnson on par with, say, Kareem Hunt and a 2018 2nd rounder, (to cite one trade I've seen go down)... Kareem Hunt has downside risk. Hunt could get hurt, or Hunt could struggle.

If you can buy Johnson at a discount today, he's the closest thing to a guaranteed profit you'll ever find in dynasty. Well, short of future 1st round draft picks.