An in-depth analysis of the best DFS NFL players and what they deem most important in the lineup-building process.

One of the most proficient gamblers that sportsbooks have ever seen, Haralabos Voulgaris, is on record saying the main reason he retired from professional gambling is that he was gradually losing his edge against the sportsbooks. Voulgaris explains that every time he placed a bet, he gave the sportsbook a metaphoric piece to the puzzle that, once solved, would completely erase his edge to the point where he would no longer be a profitable bettor. The same way sportsbooks learned from Voulgaris’ bets and eroded his edge, daily fantasy sports players can learn from their top competitors and eat away at their edge. These top competitors, known as sharps, typically play DFS at a much higher level and for much more money than others. These players normally have very advanced and accurate projection systems that give them their edge over the field. Fortunately, every time they enter a contest the sharp players’ lineups are available to the public to be broken down, analyzed and learned from. The Sharp Report will be a weekly article that uses all available and applicable data to draw conclusions regarding how the industry’s smartest decision makers and their projections systems come to their final conclusions when building lineups. Over the course of the entire season, The Sharp Report’s goal will be to project what the best players in the industry will do in upcoming contests and, in turn, figure out what it is that gives these high-level players their edge over the field.

Throughout each week, more and better information regarding things like player availability, individual matchups, and depth charts will become available. The section of this article projecting which player is likely to be rostered by most of the sharp players next week will be updated by Saturday afternoon each week after all applicable information has become available. If enough data reveals itself that a completely new player is deemed worthy of being mentioned as Next Week's Sharp Play, the original section will appear in red font and the new section will appear in green font. If all available information leads to the same conclusion made earlier in the week, the original section will be changed from black font to green font.

The players analyzed in this article consistently play, and win, in high-stakes contests and are also ranked in the top ten percent in RotoGrinders’ super heavyweight division of DFS players. Players’ names will be omitted from the article, but all lineups analyzed are from the $30K Sun BIG NFL $1,065 30-Man 50/50 on FanDuel.

These are the full lineups entered by two of the sharpest NFL DFS cash-game players in the industry. This week, both players cashed in the BIG NFL $1,065 30-Man 50/50. This article, however, is not focused on the results of these two teams, but rather the process that led the DFS players to select the players in their lineup. 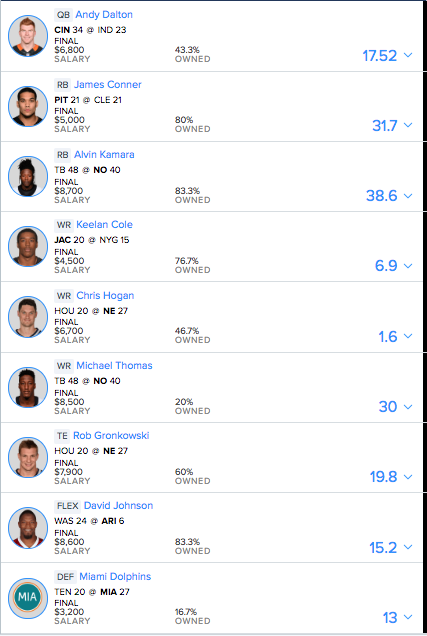 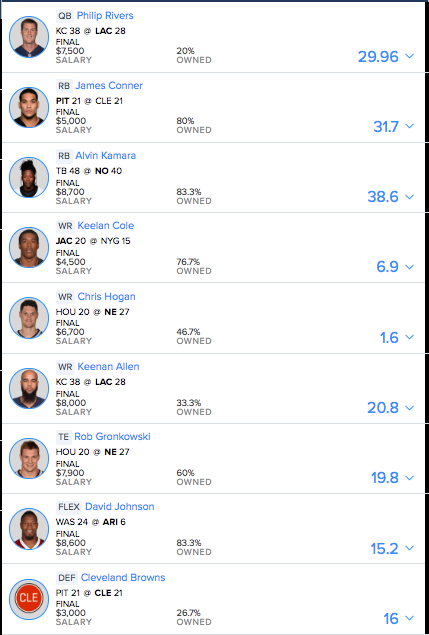 The overlap between sharps’ lineups is where true learning points are found. When the best players in the industry agree on specific players and matchups, that serves as an indicator that this specific spot is worth further investigation. On FanDuel, the top players in the industry clearly identified a handful of spots to hold the most value on the opening slate of the NFL regular season.

As 10-point favorites in a matchup projected to total 49.5 points, the New Orleans Saints came into this game expected to be in the driver’s seat of a high-scoring affair. The season opener against Tampa Bay, a team projected to be one of the league’s worst by betting markets, was Alvin Kamara’s first game without fellow Pro Bowl running back Mark Ingram II. Last season, Ingram typically played about 55 percent of snaps each week, but he will miss the first four games of this season due to suspension. Kamara was one of the most efficient running backs the league had ever seen last season, and his projected snap count and usage numbers are poised to skyrocket in Ingram’s absence. As a 10-point favorite, teams typically the ball at a higher rate in an effort to preserve their (presumed) lead in a game. Alvin Kamara checked all of the right boxes to plug in as the top running back on the opening slate of the 2018 NFL season.

James Conner, filling in for Le’Veon Bell, proved capable of holding down the metaphoric fort in Pittsburgh’s backfield. Conner was rostered by 80 percent of players in the $1,065 BIG 30-Man 50/50, costing just $5,000. Conner was rostered by approximately 75 percent of players in low-stakes cash games as well, and the reasons why are worth looking into.

Pittsburgh’s usual starter, Le’Veon Bell, missed Week 1 because he has refused to sign his franchise tag and play under a one-year contract yet again. This has led to James Conner, a second-year player out of the University of Pittsburgh, sliding into the starting running back role for the Steelers. In the past, DeAngelo Williams has filled in for Le’Veon Bell due to injuries, but he is no longer in town to replace Bell this year. When Williams was put on the field, he saw bellcow-esque numbers including over 19 carries per game. In 2018, until Le’Veon Bell signs his franchise tag, James Conner will be filling this role and assuming the heavy workload. In their season opener against the Cleveland Browns, Pittsburgh was favored by 3.5 points in a matchup projected to amass 41 total points. This low total is a byproduct of the weather in Cleveland, where the game took place. It rained throughout the entire game and the weather forecasts were calling for regular winds of up to 20 miles per hour. Weather like this typically leads to weakened passing attacks along with a boost to the respective running games. For just $5,000 starting in a role that typically sees massive volume, it comes as no surprise that James Conner was popular across the board.

Chris Hogan is the lone active receiver to have totaled over 20 targets in the New England Patriots offense last year. Starting the season as New England’s number-one wide receiver led 46.66 percent of players in the $1,065 BIG 30-Man 50/50 to roster him at home against the Houston Texans.

The two leading wide receivers from New England’s 2017 roster, Brandin Cooks and Danny Amendola, have left the team through free agency. The top returning receiver, Julian Edelman (who missed all of 2017 with an injury), will not be with the team for the first four games of the 2018 season due to suspension. Chris Hogan will be asked to assume the top role in a depleted receiving corps to start the 2018 season in Edelman’s absence. The Patriots attempted over 38 passes per game last season, and over 12 targets per game have departed from last year’s team. Hogan, filling in a more important role in the prolific New England passing game, projects for a substantially higher volume to start this season than he saw last year. Chris Hogan was not drastically underpriced at just $6,700, but as the top receiver on a 6-point favorite in a game projected to total over 49 points, Hogan’s floor and upside projected well above similarly priced players.

Keelan Cole, Jacksonville’s leading returning receiver, was priced at the absolute minimum for a wide receiver on FanDuel to open the season. Going up against the New York Giants, 76.66 percent of players in the $1,065 BIG 30-Man 50/50 identified Cole as one of the top salary saving options on the slate.

Jacksonville entered Week 1 as a 3-point favorite in New York against the Giants in a game with a relatively low projected total of just 42.5 points. The Jacksonville Jaguars’ receiving corps took a significant blow during the preseason when the team’s second-leading receiver, Marqise Lee, went down with a knee injury and was lost for the year. Keelan Cole assumed the top spot on the Jaguar’s depth chart at receiver following this injury. Going up against the New York Giants is not a bad way to start a season for a receiver, considering the Giants ranked 31st in passing yards allowed per game in 2017. The Jaguars’ passing attack is far from elite but after averaging over 7 targets per game over the last 8 games of the 2017 season, $4,500 for Keelan Cole’s projected volume was far too cheap.

Chris Hogan may have been the top wide receiver on the New England Patriots Rob Gronkowski is clearly Tom Brady’s favorite target amongst the players who were available for the Patriots’ Week 1 game against Houston. Gronkowski, costing $7,900, was the most expensive tight end on the slate, but he was still rostered by 60 percent of players in the $1,065 BIG 30-Man 50/50.

The New England Patriots entered Week 1 with two of their top three wide receivers from last season (Brandin Cooks and Danny Amendola). Couple this with their projected number one receiver, Julian Edelman, missing the first four games due to suspension, and Rob Gronkowski instantly becomes Tom Brady’s clear-cut number one option through the air. Gronkowski has always been a force to be reckoned with but, in this matchup with a depleted group of pass-catchers around him, his projected volume was higher than normal. The Patriots also entered this home game as 6-point favorites over the Houston Texans in a game projected to total 49.5 points-- tied for the most of any Week 1 matchup. Fitting Rob Gronkowski into lineups was no small task, but the best players in the industry clearly made it a priority.

David Johnson returned this weekend after missing almost all of the 2017 season due to injury. The bellcow running back for the Arizona Cardinals was rostered by 83.33 percent of players in the $1,065 BIG 30-Man 50/50, drastically more than the 45 percent of players in low-stakes cash games.

David Johnson returned from injury in Week 1 against the Washington Redskins, one of the lowest ranked defenses in the NFL heading into this season. Over the offseason, Arizona let playmakers John Brown and Jaron Brown leave in free agency. These departures open up over 120 targets and 750 yards of receiving production. There is a serious lack of playmakers, besides David Johnson and Larry Fitzgerald, left on Arizona’s roster headed into this season. As betting favorites, the projected game flow favored the Cardinals heavily utilizing the running game as well as Johnson returning to his masterful 2016 form and paying off his $8,600 price tag.

Christian McCaffrey and the Carolina Panthers head to Atlanta to take on the Falcons next Sunday afternoon. Unfortunately, this game features two teams with a handful of highly impactful injuries coming out of their Week 1 games. The Panthers will be without Greg Olsen due to a foot injury, and the Falcons will be missing both Keanu Neal and Deion Jones on the defensive side of the ball.

Over the course of his young career, Christian McCaffrey has played approximately 50 percent of his games with Greg Olsen in the lineup and 50 percent without Greg Olsen. In games without Olsen, McCaffrey averages two more targets and nearly three more FanDuel points per game. It is worth noting that all of these games came last season in McCaffrey’s rookie year and this year Norv Turner wants to increase McCaffrey’s workload significantly. Priced at $7,400 on FanDuel, McCaffrey will not break the bank and is likely to be one of the first players locked into lineups across the board.