Is Brandin Cooks A Recipe for Success? - Footballguys

A detailed examination of Brandin Cooks fantasy prospects in 2018.

Brandin Cooks is 24 years old, has three consecutive 1,000-yard seasons on his resume, has played with two of the best quarterbacks in NFL history, and somehow finds himself playing for his third team in as many years. It's not unusual for players to switch teams, but it's almost unheard of for a player of Cooks' caliber to switch teams in successive years. It's even stranger to think he was traded for a first-round draft pick (and then some) in back-to-back offseasons. Is there anyone else in history that can say the same?

Regardless of how he got here, Cooks is now a member of the Los Angeles Rams and moves from the AFC's best team (New England) to one of the NFC's Super Bowl favorites (Los Angeles). He's been a top-12 fantasy receiver for three straight seasons, and will immediately become the Rams top pass-catcher. The question fantasy managers must ask is how Cooks' new home affects his outlook?

In spite of being a fantasy WR1 for three straight seasons, fantasy managers are drafting Cooks as a low-end WR2 this year. His current price tag discounts all of the risks inherent in his new situation. Although he no longer has a viable path toward a top-five breakout, he also has a secure floor and will match or exceed his ADP if he stays healthy.

Cooks is a divisive player. Even when he was putting up top-12 fantasy stats in back-to-back seasons in New Orleans, plenty of football analysts questioned his place among the league's elite. His critics questioned his size and ability to make plays in the middle of the field, against linebackers, in particular. They openly criticized his week-to-week inconsistency and felt he benefited from a proven scheme and a future Hall of Fame quarterback. Then came the trade to New England. There was no way Cooks would match his stats from New Orleans at a Patriot, right? The Patriots spread the ball around, and Cooks was going to have to share the wealth with Rob Gronkowski, Chris Hogan, Julian Edelman, Danny Amendola, Dion Lewis, and James White. A funny thing happened on the way to the critic's table; Cooks delivered yet another 1,000-yard, seven touchdown season.

The On-Field Performance Is Elite

No matter what you think of Brandin Cooks' fantasy value, you cannot question his on-field abilities. In a world where adjectives like "elite" and "amazing" are thrown about with regularity, Cooks deserves the appellations.

Can Sean Payton and Bill Belichick Be Wrong?

It's highly unusual for a player, in their prime. to be traded. When it does happen, it usually coincides with an irreparable personality conflict or a contract dispute. In a league where trades are rare, what does it say about Brandin Cooks that he was traded not once, but twice? It wasn't because of his on-field play, as we've already articulated, so what's the rationale? Further confounding things are the teams who traded him. The Saints and the Patriots are two of the best-run organizations in football, and their front offices are respected league-wide. You can understand the Saints accepting a first-round draft pick for Cooks when they decided they couldn't afford to keep Cooks and Michael Thomas long-term. But how do we reconcile Bill Belichick paying a princely sum for Cooks only to move him in another trade 12 months later? In a season where New England made the Super Bowl and Cooks had Pro Bowl caliber stats? It feels like a red flag. And many fantasy managers will keep Cooks off their draft boards because of it. Yet, there hasn't been a hint of impropriety. No legal concerns. No locker room scuffles. No sideline rants and raves.

One Man's Trash is Another Man's Treasure

If the Patriots decision to trade Cooks after a single season alarms you, the Rams willingness to pay the asking price should offset the concern. Not to mention the Rams decision to give Cooks a sizeable contract extension before he ever played a snap for them.

The Rams led the league with 29.9 points per game, as head coach Sean McVay successfully implemented a balanced offense. Todd Gurley was not only the best running back in the league; he led the Rams with 64 receptions. It would be irrational to assume Gurley's role will be diminished, which leaves a trio of talented receivers competing for a modest number of targets. No one on the Rams had 100+ targets in 2017.

Watkins signed with Kansas City, which facilitated the trade to acquire Cooks. The idea Cooks would merely take over Watkins' role is ridiculous. Cooks is a much better receiver. He runs better routes. He's more productive after the catch. He has better hands. It's really no contest. So we can safely project Cooks for more than 70 targets, but how high can we go?

The Volume Is Problematic

The Rams threw the ball 511 times last year. Teams evolve, and it's possible McVay's offense changes this year, but logic dictates otherwise. Todd Gurley is the best player on the team, and the Rams defense looks better than last year's unit, which means a lot of ball-control game scripts. When a team scores nearly 30 points per game, it's not likely to change much. Our projections call for the Rams to throw the ball 533 times. How does that compare to what Cooks is used to in New England and New Orleans?

It's hard to make the math work. In Cooks three 1,000-yard seasons, he's been targeted approximately 19% of the time.

If we're right in our assumption the Rams will throw the ball 533 times this year; Cooks will need to see a massive increase in his target share to match his career numbers.

Will the Rams target Cooks nearly 23% of the time? It's possible. He's their best receiver. He's being paid to be the cornerstone of the passing game. And Sean McVay has shown a knack for optimizing his personnel. But it's a risky bet to make because both Cooper Kupp and Robert Woods played well last year and earned their roles. For Cooks to get 120 targets, one of those other receivers is going to have to take a major step backward.

How much of a drop-off is Jared Goff?

Would anyone claim Jared Goff is as good as Tom Brady and Drew Brees? Cooks' prior quarterbacks are not only elite, but they are also future first-ballot Hall of Famers, and some would argue they're two of the three best quarterbacks in league history. How can any player go from playing with Brees and Brady to Jared Goff and expect to maintain their career averages? It's impossible, right? In the immortal words of Lee Corso, not so fast! 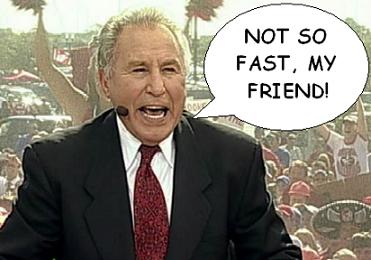 No one would (or should) claim Goff is as good as Brees or Brady, but McVay has Goff playing at an incredibly high level. And it stands to reason he has more growth ahead, as last season was only his second year starting, and his first in McVay's offense.

On sheer ability, Brandin Cooks is a No. 1 fantasy receiver. He has three straight top-12 fantasy finishes, coinciding with three consecutive 1,000-yard, 7+ touchdown performances. Cooks can do it all. He runs great routes, has the vertical acceleration to get open deep, the fearlessness to make catches over the middle, and great hands to come down with contested balls in tight quarters. The Rams were willing to give up a first round pick and then sign him to an $88 million deal before he played a snap in Los Angeles. It is clear Cooks will be the Rams focal point. But, the Rams throw the ball nearly 20% less than the Patriots and Saints. And Robert Woods and Cooper Kupp are good enough to continue playing big roles in the game plan. While it would be asinine to assume Cooks settles for Sammy Watkins No. 3 role from a season ago, it's also difficult to project Cooks for the 120 targets he's averaged in prior seasons. If all three receivers stay healthy, Cooks would be lucky to net 100 targets which essentially guarantees Cooks falls short of the Top 12. On the other hand, he's the safest bet of anyone in the Top 20. We also can't discount injuries. Robert Woods missed a month last year and if either he or Kupp get hurt, Cooks would be right back in position to put up WR1 results. So draft Cooks as your No. 2 fantasy receiver, not your No. 1. He'll deliver fair value, and you have the call option on another Top 10 season if injuries or the team's run/pass ratio go his way.

Other Thoughts from Around the Web

"Cooks faces a similar situation [to Sammy Watkins]. He'll play often, but it's going to be hard to match his numbers from recent years if Woods, second-year slot man Cooper Kupp and all-purpose back Todd Gurley II continue to soak up a similar share of the targets. Cooks is best viewed as a fringe flex option."

"Part of the Rams' magic is that they managed to finish first in points per game and 10th in total yards per game without a bona fide No. 1 receiver. Shoot, Todd Gurley led the team in receptions. That guy had a lot to do with their success. The Rams' tendency to involve and utilize everyone to their strengths without a heavy workload for their wide receivers could throw the proverbial wrench into Cooks' stats."

Dr. Octopus doesn't see how the Rams use Cooks merely as a deep threat:

"Obviously I can not sit here and state for sure that Cooks will receive 100 or more targets, but I don't know that DeSean Jackson nor Watkins has much bearing on this situation. McVay was running Jay Gruden's offense in Washington and Jackson has always been used as a pure deep threat. I don't like the schtick when people throw out "do you watch the games" but when people say Cooks is a one trick pony or just a situational deep threat guy, the thought definitely crosses my mind. Cooks was not exclusively a deep threat in NO and especially not in NE. As far as Watkins goes he was brought to the team late in the game after all of the offseason game plans were in place, so I won't flat out dismiss his low target totals but I do see some explanation for it. I also think he's been a career underachiever.

I just don't think the Rams sent a first round pick and threw a big money contract at Cooks just to give him 70 targets. That's not logical but teams don't always follow logical patterns I guess."

"My biggest issue with Cooks and the rest of the WRs is that even though they run the 11 personnel set over 80% of the time 63% of plays were passes compared to 72% percent NFL average. That’s what my concern would be. Now I don’t know at this point how much of that was RPO but I plan to find out because that absolutely makes a difference in my mind."

King of the Jungle thinks anyone expecting Cooks to duplicate what he did with Brady and Brees is crazy:

"It is my opinion that anyone that thinks Cooks is going to blow up on the Rams this year more so than he did with Brees and Brady may be insane. No offense, but I think Kupp is going to continue to surprise and surpass last years numbers, if Woods is healthy he will produce, promising TE group will improve, and Gurley is still the centerpiece. Goff is still a young QB who will take the safer option. I don’t understand the Cooks love."