Please note, if you're reading this in an email, we've got a cleaner version online here.

We do a ton of insightful, thoughtful and serious features here at Footballguys with smart people thinking deeply for you. This is not one of those features.

This is Random Shots and it's a few pages of me downloading my goofy and dysfunctional mental hard drive that gets stuffed with way too many random items from too many hours watching, reading about and listening to football every weekend and throughout the week. It's the only way I manage. Here's hoping it has some value for you.

Seriously. I say this every year and I'll say it again because it's true. Happy Thanksgiving to you and yours from all of us at Footballguys. Not sure how Holidays get much better than combining food and football and family and community.

I'm thankful for a zillion things - not the least of which is the fact you'll take a couple of minutes to hang with us and share a goofy week of observations from my twelve-year-old viewpoint.

I've long said Footballguys has the best family of readers in the world and I'll put them up against anyone doing anything. Bring it. You guys rock and I'm thankful for you.

Happy Thanksgiving Folks. And may your Turkey Experience this year be better than Shaq's... 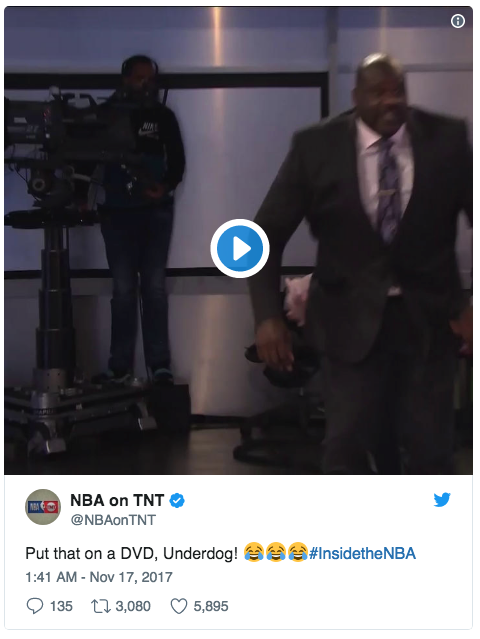 Joe and the Footballguys Staff

This week will be Senior Day for many college programs as players suit up one last time. Sweet move from Eastern Michigan with special helmets featuring the numbers of all the Seniors. 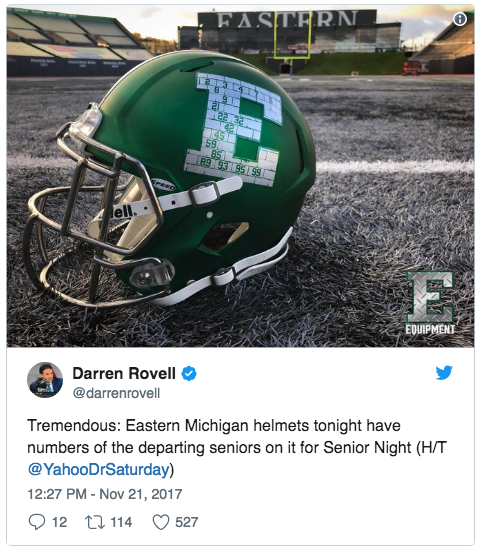 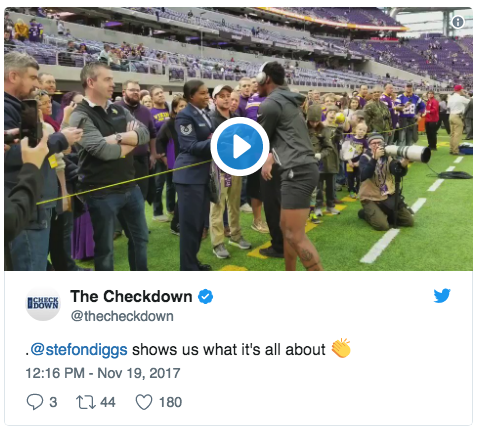 Ben Roethlisberger killing it with the Dilly Dilly audible. 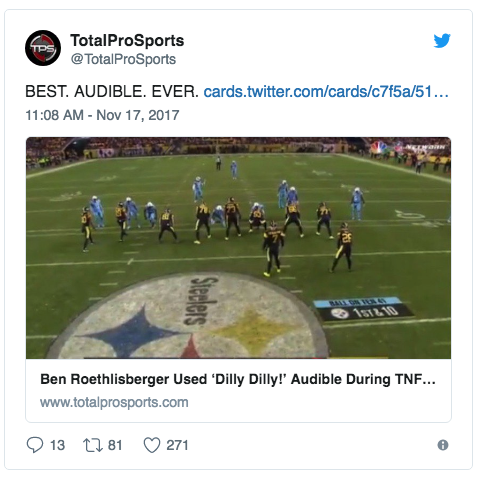 Thanks to Footballguys Mike Wenger, Greg Lucas, and Joe Caulfield for that one.

If you've read Random Shots in years past, you know I love the "Aaron Rodgers looks like John Krasinski from the Office" thing.

Now we see even Krasinski agrees. 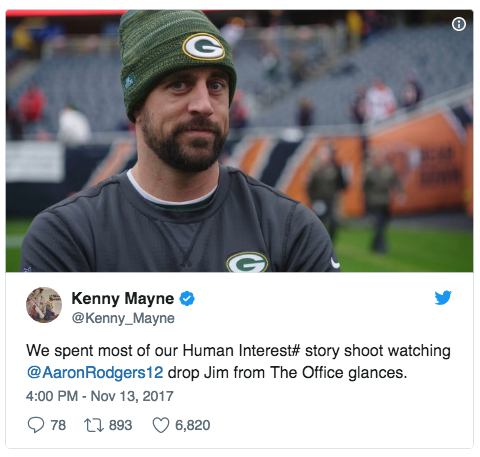 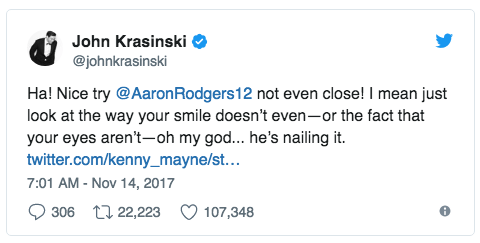 NBC rolled out the Madden Cam Thursday night as the primary viewing angle.

You know you didn't? 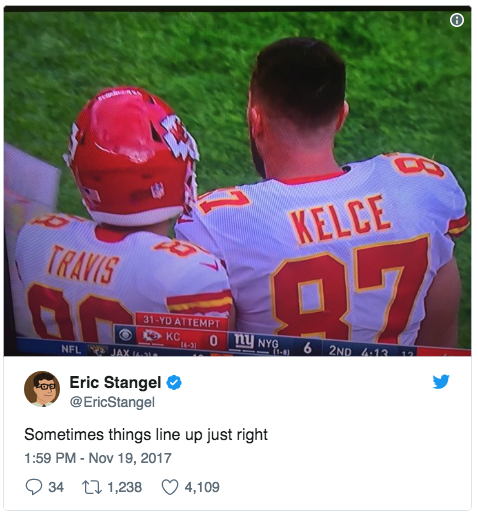 Thanks to Footballguy Brian Sumner for that one. 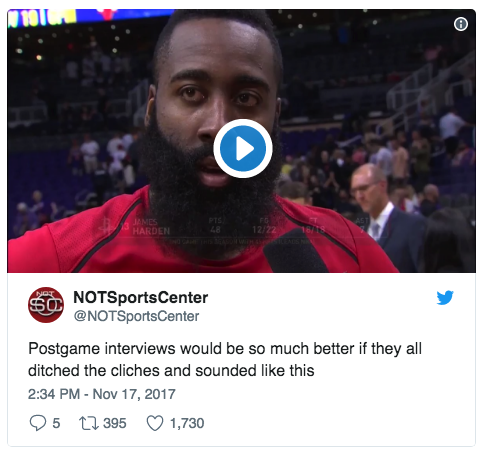 Few players were more electrifying and fun to watch than Michael Vick. 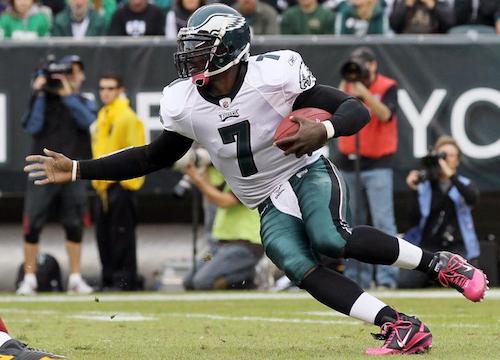 And of course, few players fell from grace more dramatically than Vick when he went to jail for his involvement in a dogfighting ring. He declared bankruptcy in 2008 owing creditors $17.6 million dollars.

But Vick's story didn't end there. He served his time and by most accounts, emerged as a changed person.

This week, ESPN's Darren Rovell told the rest of the story.

"Former NFL quarterback Michael Vick made the final $1.5 million payment to creditors on Thursday, meaning he paid back $17.4 million of the $17.6 million that he owed when he filed for bankruptcy in July 2008.

"The payment and final payouts were confirmed by Joseph Luzinski, a senior vice president at Development Specialists Inc., a management consultancy firm and the liquidating trustee in Vick's bankruptcy.

"Vick elected to file for Chapter 11 bankruptcy instead of Chapter 7, which would have allowed him to liquidate his assets and not owe any more. Vick, who served 548 days in jail for taking part in an illegal dogfighting ring, took the rare step of kicking in future income to pay off his creditors.

"I didn't want to stiff people who never stiffed me," Vick told ESPN in 2014.

"That was like playing the lottery," Vick told ESPN three years ago, when he had paid off 85 percent of the debt. "They didn't know if I was going to fully come back, and if you were to ask me, I would have done the same thing. But that's just how God worked in this situation."

That's why we give people second chances. I took a good bit of flack back in 2009 for supporting Vick when he returned to the league. But I see it like this: He did something horrible. He paid his debt to society. He seemed to be a changed man. And he went out and tried to do the right things after prison. That's how forgiveness and justice works. 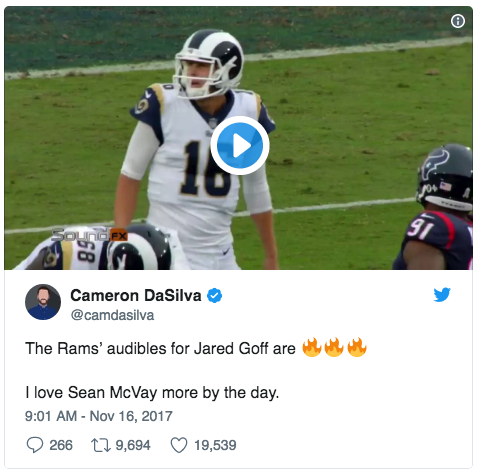 Everyone was excited about Danny Woodhead's return this week. 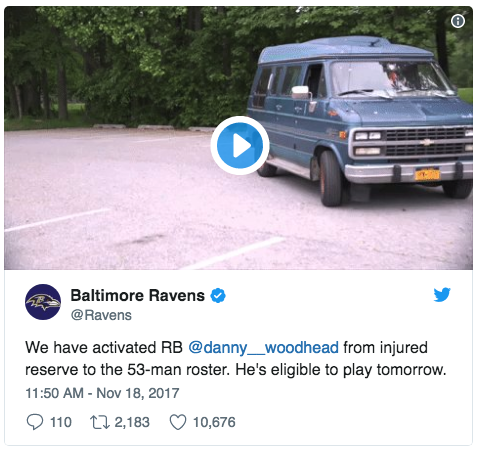 Unfortunately, Woodhead's "Hype to Actual Performance On The Field" ratio this week was in the Marshawn Lynch range. 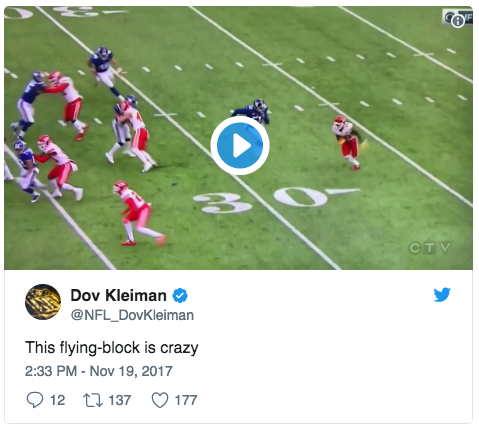 The Raiders should totally go with this Estadio Azteca decor for their new stadium in Las Vegas. 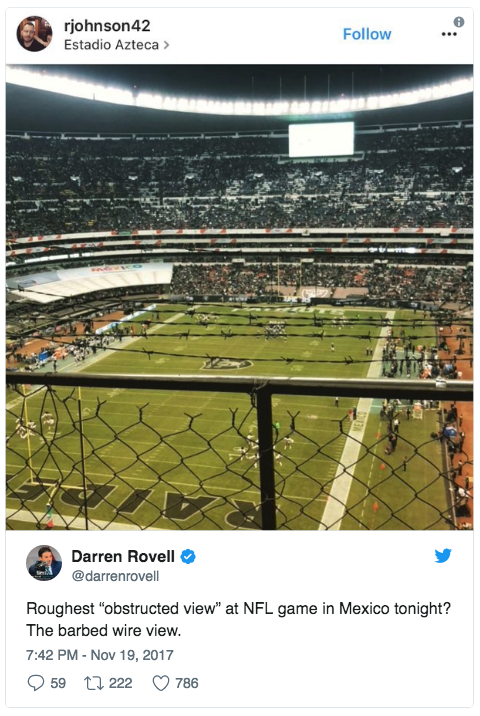 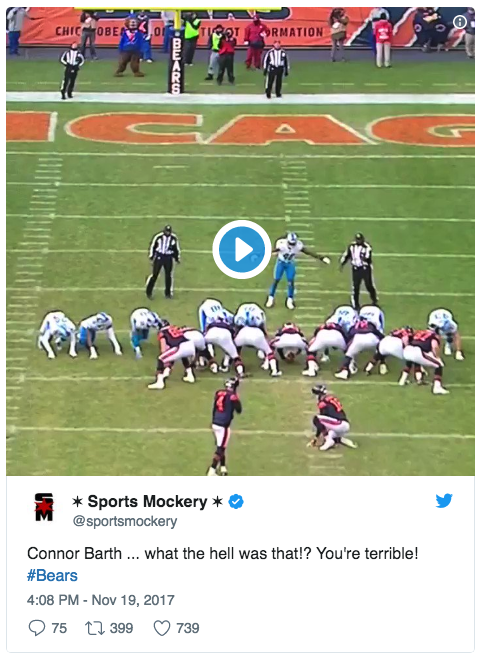 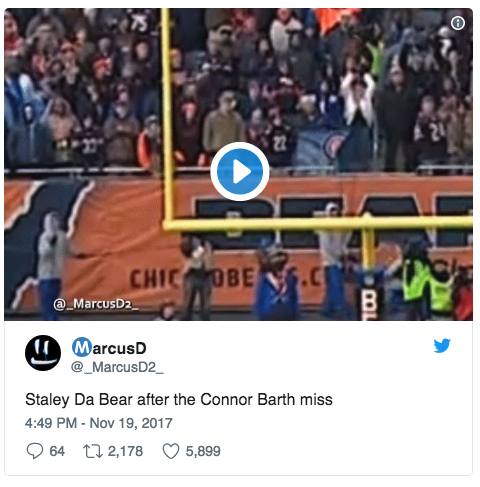 On the upside, they have Tarik Cohen flying (literally) around... 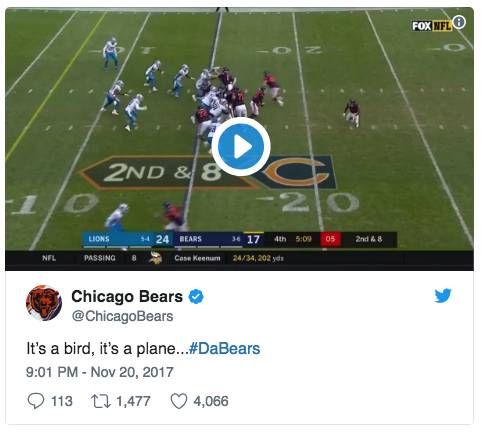 Thanks to Footballguy Matt Waldman for that one.

Sometimes a caption says it all. This is one of those times. Well done, Big Cat. 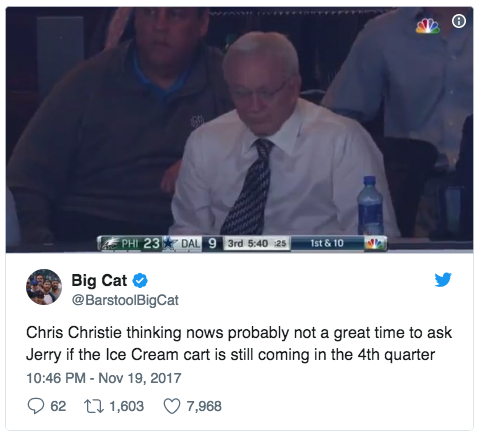 Hockey Note. The goalie scoring a goal was great enough. But the Vince McMahon Strut celebration put this over the top. 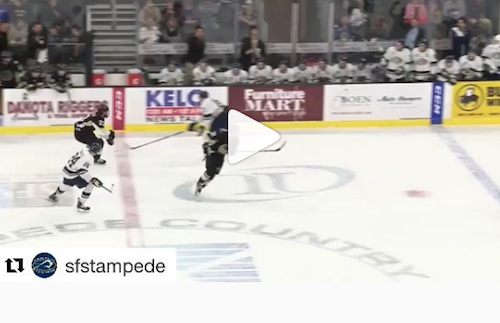 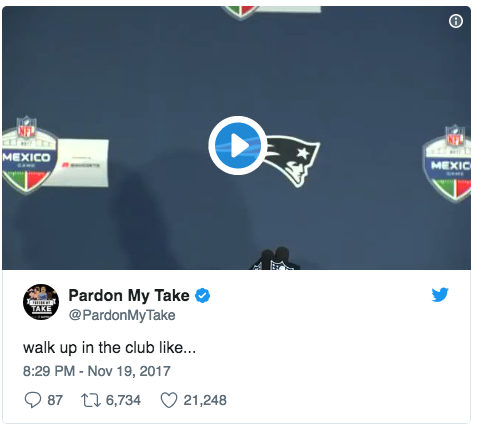 Definitely more acclimated than his coach who was thankful they escaped Mexico City without an earthquake or volcano eruption...

“Players did a great job dealing with all the challenges that we had to deal with,” Belichick said on WEEI’s “Dale and Keith with Holley” radio show Monday afternoon. “I think we’re fortunate there was no volcano eruptions, earthquakes or anything else while we were down there. I mean you have two NFL franchises in an area that I don’t know how stable the geological plates that were below us [were], but nothing happened so that was good.”

Question: On a scale of 1 to 10, how "Atlanta" was the MARTA bus blocking the Weather Channel's view of the Georgia Dome implosion? 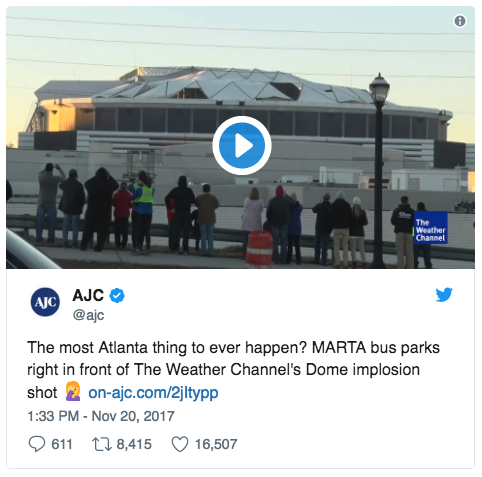 It's also why the Weather Channel does weather.

The clear view was pretty crazy. 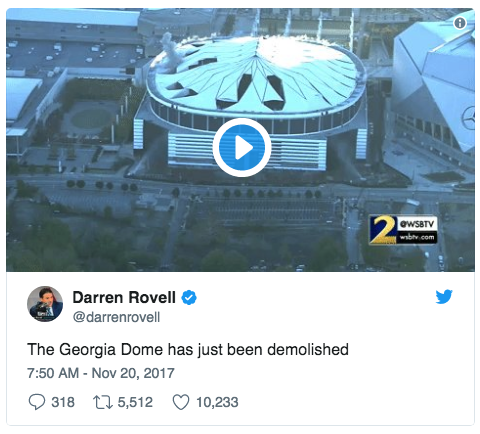 While everyone was making Super Bowl jokes, I kept thinking "Are they sure nobody is in there?"

Hang in there Browns fans.

According to For The Win, all we need is for these 46 things to happen and we're PLAYOFF BOUND. 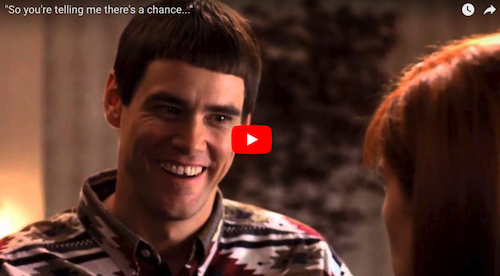 It's just Steve Young biting into a raw fish... 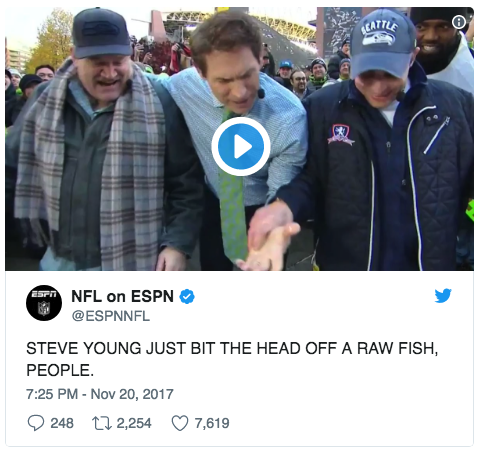 My favorite part was the Seahawk Bro on the right pushing Young away to grab the spotlight for himself. Then Young grabs his own fish and stole the show. Until Randy Moss stole everything at the end.

I have no idea what this fan is doing behind the announcers. 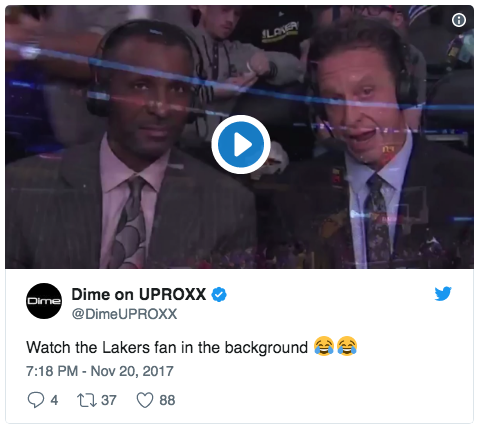 That can't be real, can it?

And if it is real, you have to love the logic of "This smells terrible. Let's taste it..."

Russell Wilson, you're kind of ridiculous. 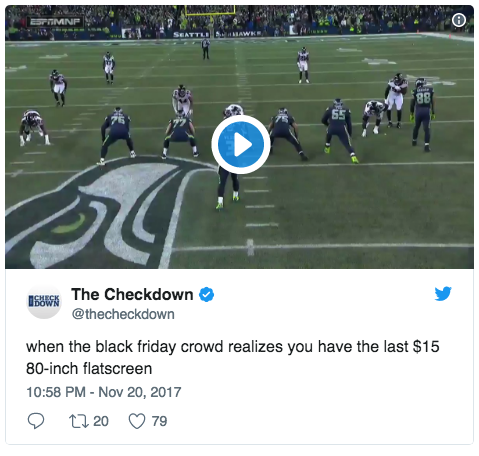 I'm telling you right now, if I coached USC, I'd throw to #80 on every play. Dude is elusive. 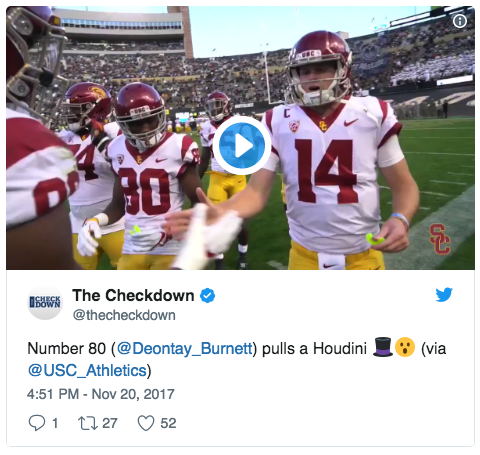 Wrapping this one up with some Thanksgiving Dinner advice and the Music Note. Family Gatherings can be tough sometimes as everyone has different opinions and beliefs. Just remember that one thing Unites Us All... 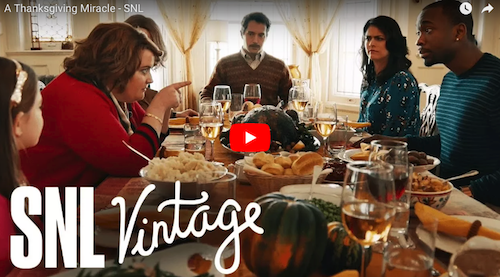 That'll do it for this week, Folks. Thanks to Footballguys Doug Drinen, Clayton Gray, Keith Overton, Matt Waldman, Brian Sumner, Mike Wenger, Greg Lucas, and Joe Caulfield for the help on this one. If you've got a Random Shot of your own, shoot me an e-mail at bryant@footballguys.com.

Peace and Grace to you. And Happy Thanksgiving.