Please note, if you're reading this in an email, we've got a cleaner version online here.

We do a ton of insightful, thoughtful and serious features here at Footballguys with smart people thinking deeply for you. This is not one of those features.

This is Random Shots and it's a few pages of me downloading my goofy and dysfunctional mental hard drive that gets stuffed with way too many random items from too many hours watching, reading about and listening to football every weekend and throughout the week. It's the only way I manage. Here's hoping it has some value for you. 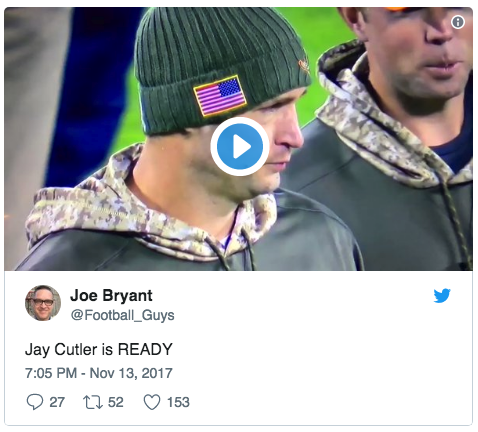 Ready for exactly what might be a good "Caption This" contest question...

The Florida - South Carolina game should have come with a warning it wasn't advisable for fans with heart conditions... 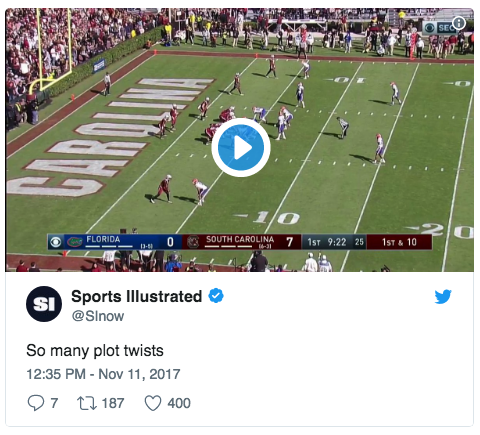 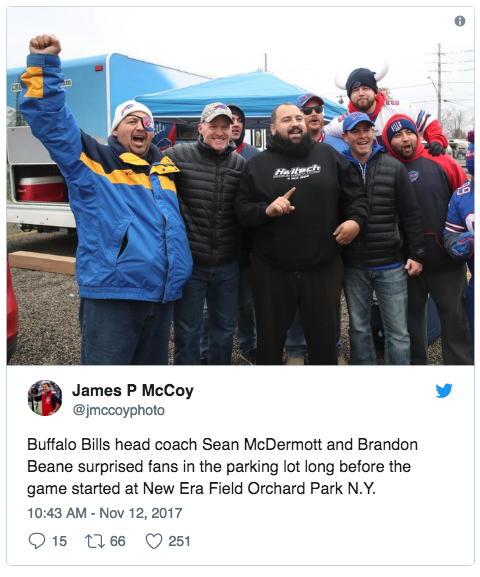 Let's hope they were long gone by the time this happened... 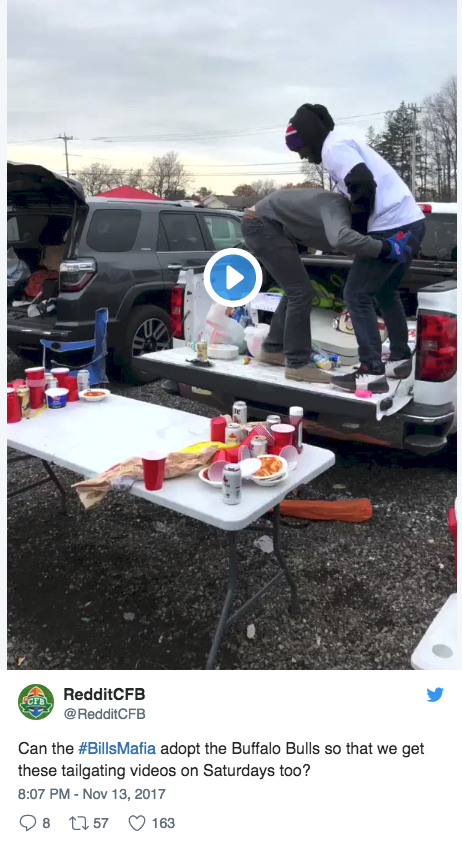 How does someone not die there every game?

I'm with the guys at Barstool. Seems like opening a store selling nothing but plastic tables would be a gold mine in Buffalo.

I'm with my buddy Josh Moore. 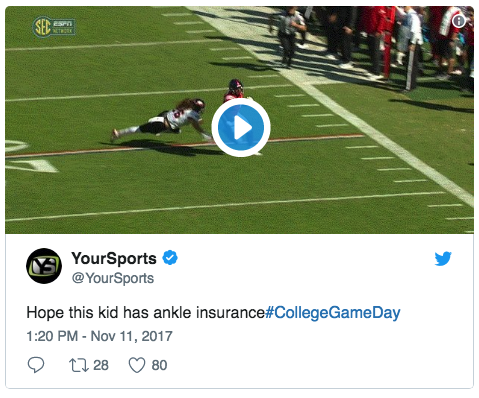 Cam Newton is far from perfect. But this is why his guys love him. This is important and a sweet lesson in human nature and recognizing the people on your team that make your job possible. 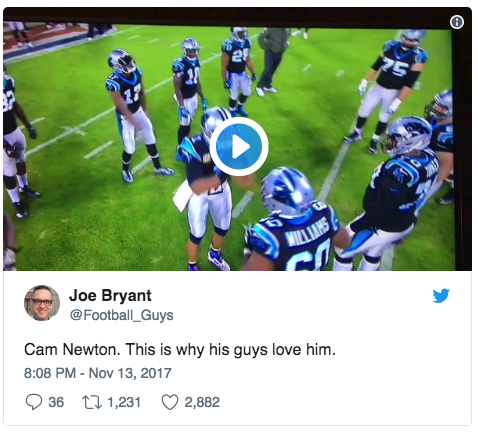 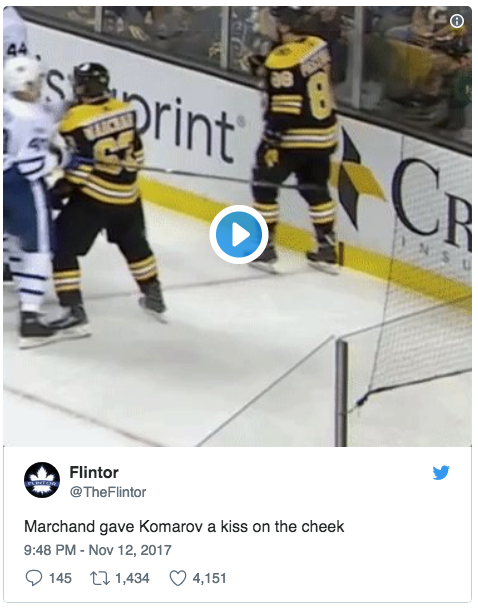 Not gonna lie. I didn't see this coming... 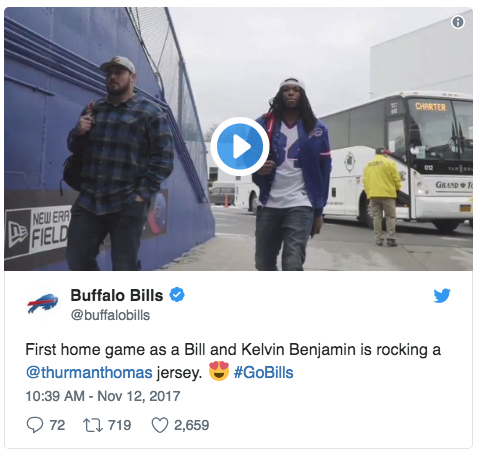 Watson from a few weeks ago: 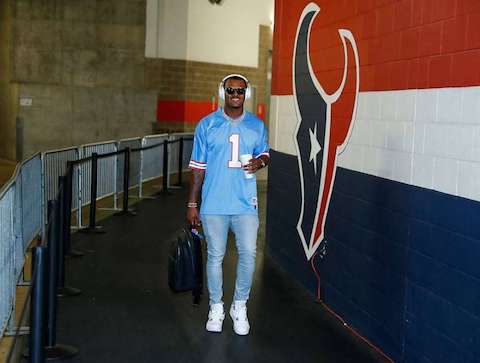 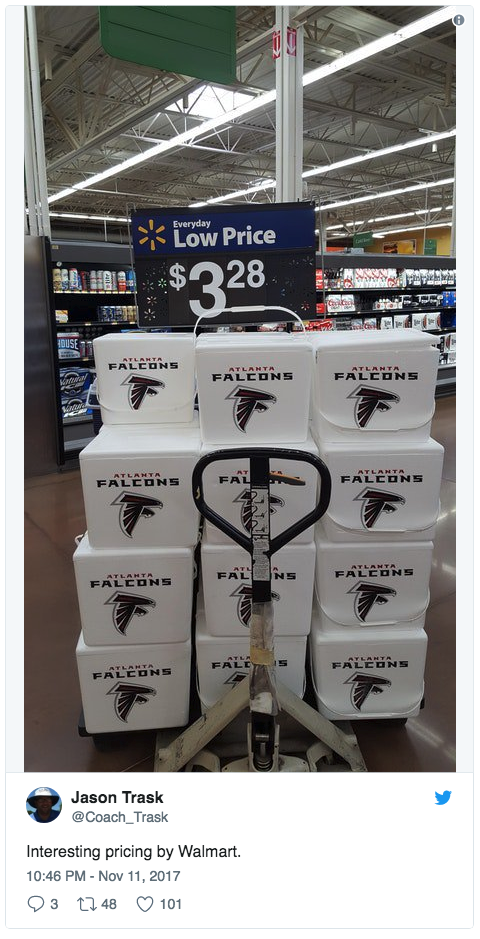 Thanks to Footballguy Clayton Gray for that one.

Music Note this week from one of the all-time underrated bands: Dawes. If you're looking for a chill and thoughtful vibe, they're your ticket. Plus some of the best songwriting around. "All Your Favorite Bands" slays me every time. 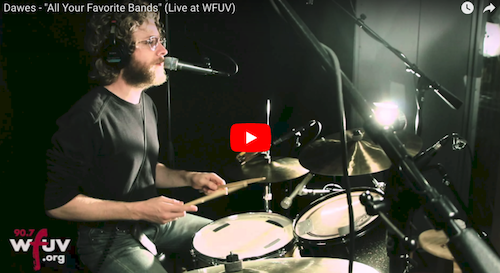 That might be the nicest thing you can say to someone...

John Fox is a Random Shots favorite mostly for the 3-Pack-A-Day Marlboro voice and his hatred of the Forward Pass. But the seat in Chicago is warming up. Beat Writer Mark Potash from the Chicago Sun-Times with the not so subtle Twitter avatar...

Sunday, ESPN's Adam Schefter and Chris Mortensen, two of the most respected journalists in sports reported on the state of NFL Commissioner Roger Goodell's contract extension:

"The last written counterproposal from Goodell, which was around the first of August, was seeking about $49.5 million per year, as well as the lifetime use of a private jet and lifetime health insurance for his family"

The league disputes this but let's be honest. Nobody is believing anything that comes out of Park Avenue over Schefter and Mort. Which is a big part of the problem.

I've been generally supportive of Goodell. But Television ratings are dropping dramatically, suspensions are a public relations circus, nobody has a clue on the anthem protests and the man in charge of all that asks for a salary raise to just shy of $50 Million per year with a free lifetime Private Jet?

And this isn't just random whining. I do that too. But this isn't that. This comes from caring about the NFL and our game. I'm guessing you feel the same. There is no such thing as "too big to fail". There is "big enough that you can make a lot of bad decisions before you're finally exposed and then fail."

Case in point: This was the cover of Forbes Magazine TEN YEARS AGO. 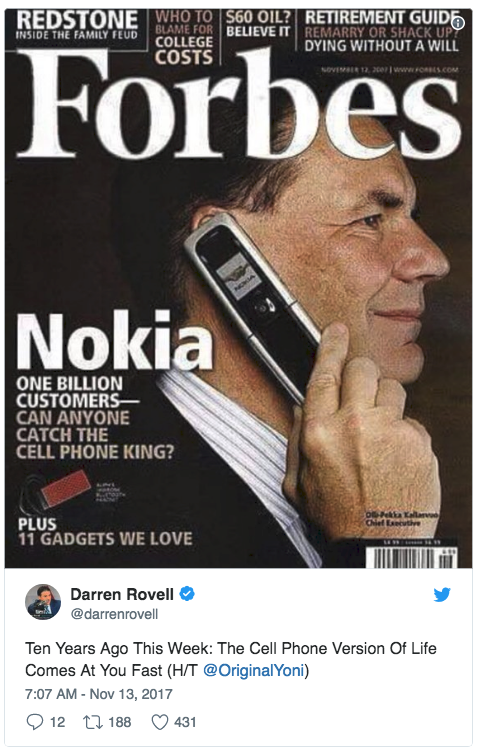 I joke about "Life Moves Pretty Fast" with Jimmy Garoppolo waking up as a Patriot with a 6-2 record and going to bed 0-8.

This isn't as funny.

NBA Note. I know they only won by three but no need to let facts get in the way of a great video. 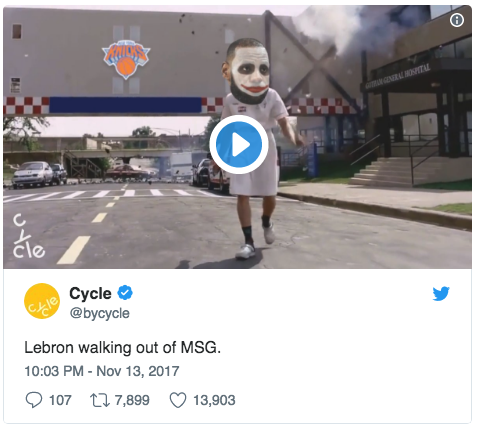 The Canadian Football League is not giving up the celebration mantle without a fight. 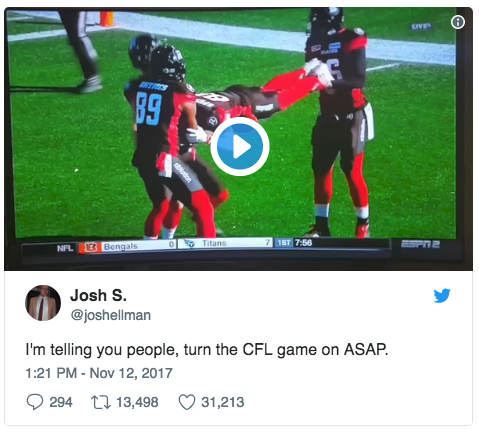 Thanks to Footballguy Clayton Gray for that one.

It's Rivalry Week for Ohio State and Michigan. The feelings are strong here. 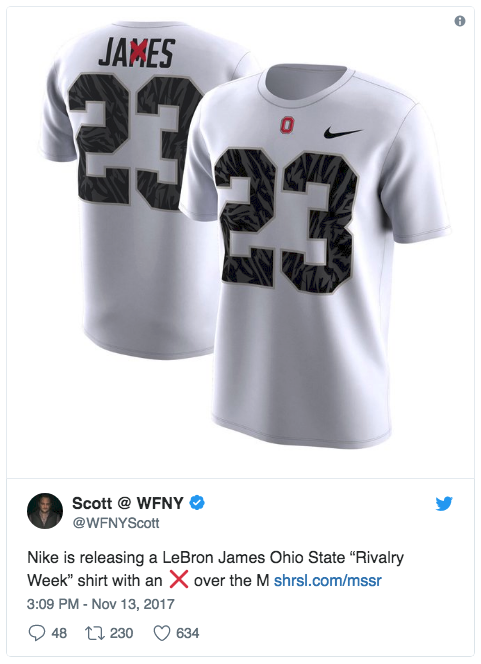 Mostly because he runs with the football like he stole it. 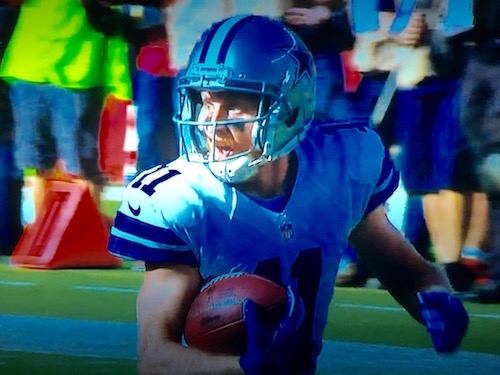 His affinity for hot sauce is well known and now he's got the cleats to match.

And truth be told, this whole thing was just a flimsy excuse to pull up this old picture of Beasley photobombing Roger Goodell and Jerry Jones. And to ask the question once more why Andy Reid was wearing this uniform.

Looking to the fourth quarter, John Fox had Green Bay right where he wanted them...

What didn't go to plan though was the Bears challenging a call that resulted in a turnover for them. 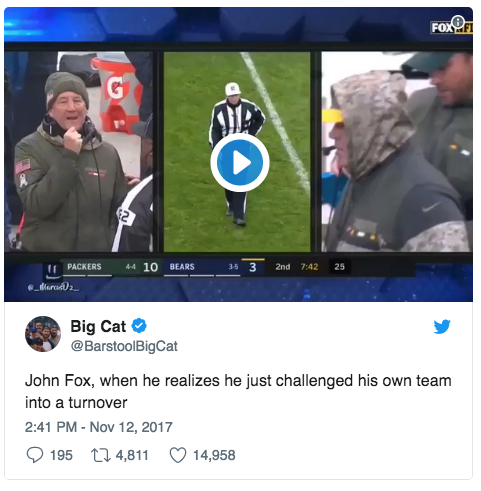 That's more on the rule than Fox. Seeing what he saw, it's easy to understand why he challenged there. There ought to be some tweak to the touchback rule for this. As well as some sort of "safety" that a challenge won't wind up with such a negative outcome.

After the game Sunday, New Orleans RB Mark Ingram II said the Saints were scoring "at will". What's that look like? 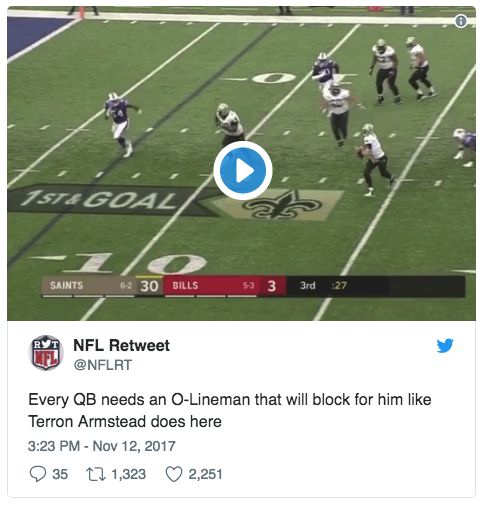 On a side note, Mark Ingram II found himself on the receiving end of a cup of beer after jumping into the stands following a touchdown. 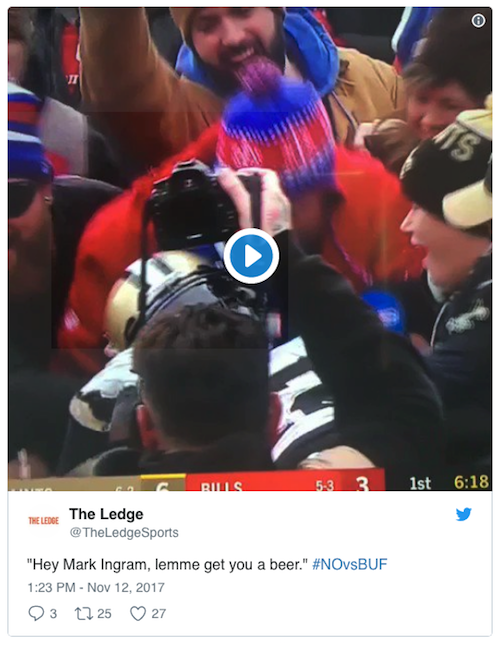 I'm a little mixed on that. Personally, I don't think you should ever under any circumstances throw something at an athlete. Especially not a $10 beer. But on the other hand, if you jump into the stands in Buffalo as an opposing player, you need to be pretty much ok accepting you'll get what you get.

Josh Lambo with the Power Slide after his game-winner. 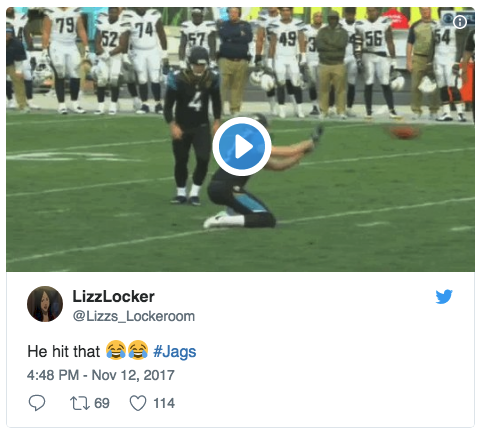 With all the back and forth and the game-winning kick, the move that stood out to me was Jaguars WR Allen Hurns and his headsup and gutsy play with just 50 seconds left on the clock. Hurns injured his ankle on the play seriously enough that he's expected to miss this coming week. With the clock ticking and the Jaguars out of timeouts, Hurns knew he'd cost his team ten seconds on the clock if he stopped the game with his injury. Hurns was able to crawl off the field and save his team the precious seconds. And they went on to score to send the game into overtime where they won.

JuJu Smith-Schuster continues to win the hearts of everyone except for Bengals fans with this A.J. Green tribute TD celebration Sunday. 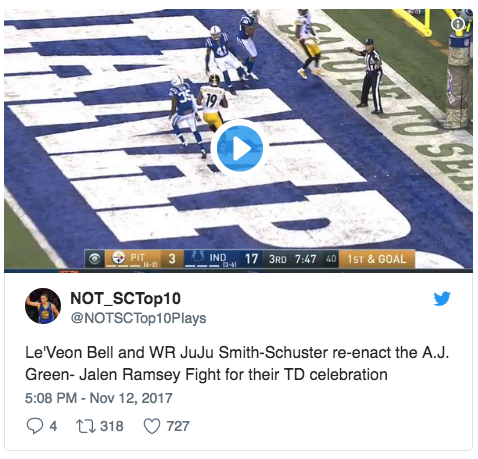 Thanks to Footballguy Jake Bryant for that one.

Kid is on FIRE.

Here's life as a Browns Fan. 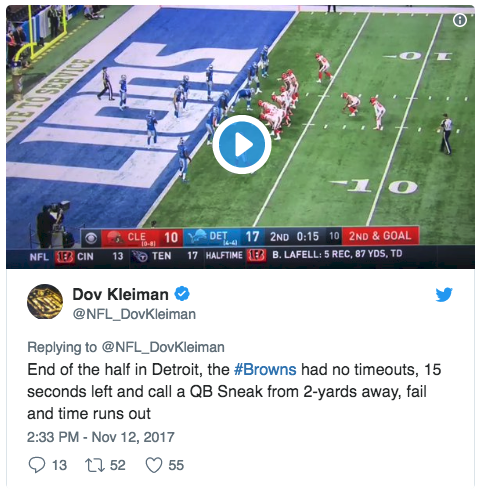 Welcome to the game Maurice Harris. Harris was undrafted as a rookie last year and saw some game time but he found himself back on the practice squad this year. He was called up to the 53 man roster Saturday and delivered with his first pro TD reception Sunday. 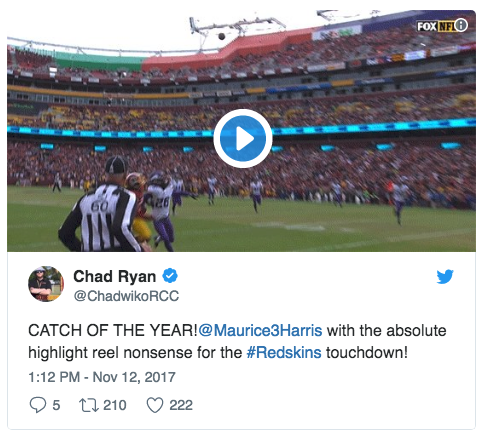 Cincinnati's Vontaze Burfict did the "Money Manziel" after being ejected from the game. 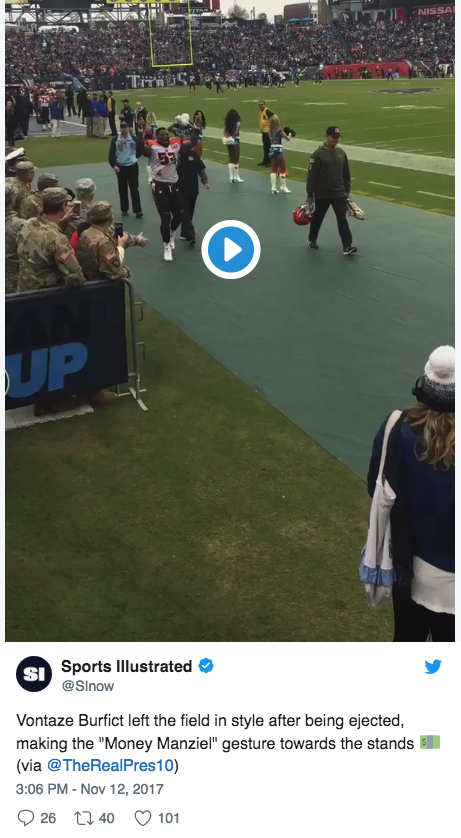 Of course he did.

I have to admit, this looks pretty bad...

Linval Joseph with a Physics Lesson. 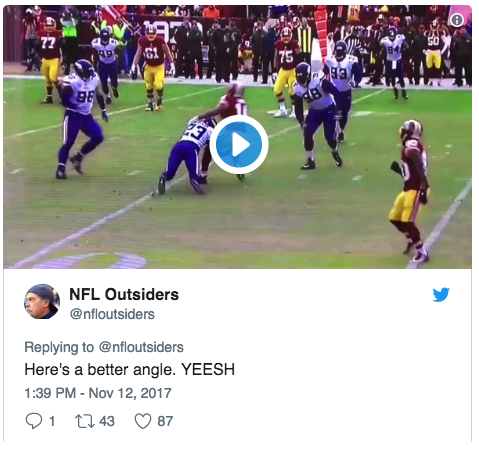 It's November which means it's Movember. Time to grow that mustache and raise awareness of men's health issues, such as prostate cancer, testicular cancer, and men's suicide.

This week's mustache is brought to you by Vince Wilfork. 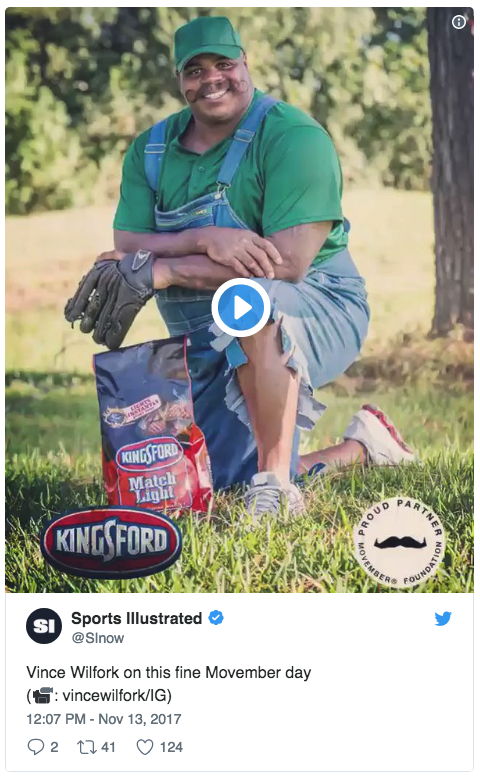 YES. Get out there, Fellas.

When the Brocketship is launching, it behooves oneself to keep your head on a swivel... 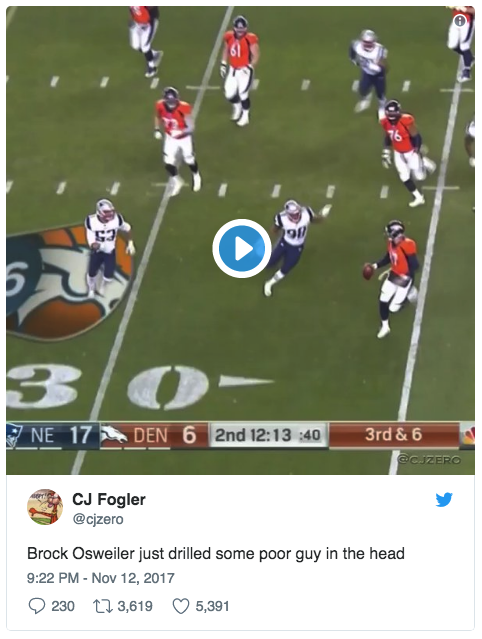 What's worse for Manning - having your record broken or ESPN not being able to find a color picture of you... 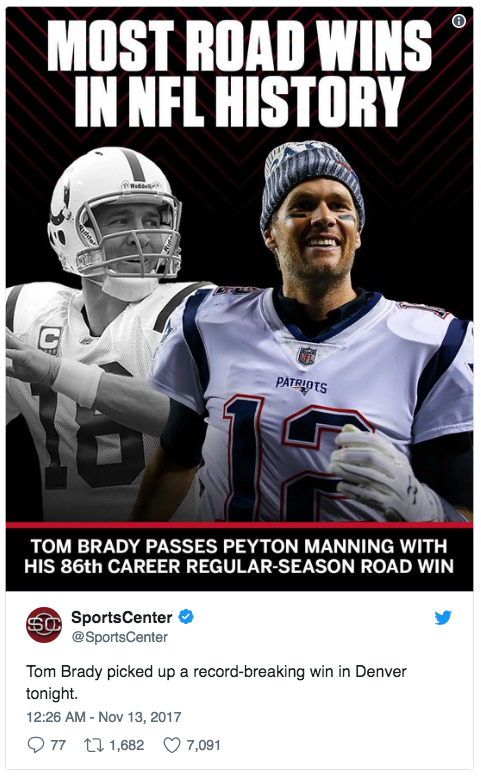 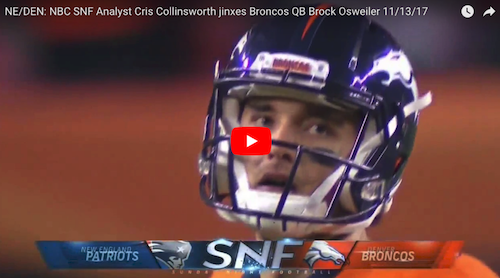 Wrapping with this one. Teddy Bridgewater was back on the field finally Sunday after a long time off recovering from a massive knee injury. At some points, there were questions as to whether Bridgewater would ever play again. Sunday, he gave an answer as he was in uniform and serving as the backup QB.

You can see it was sweet for him. 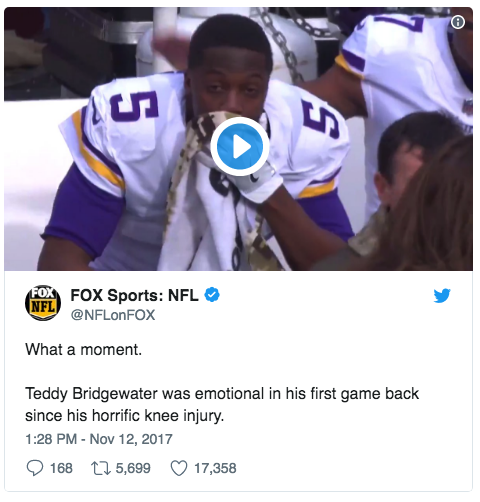 It was a cool moment for Bridgewater and it's something we can learn from too. Be thankful for things we might take for granted.

I don't know Bridgewater, but my guess is today he has a different sense of gratitude for being able to do the things he does than he did a few years ago. It's human nature but sometimes we don't appreciate the things we have until we're in jeopardy of losing them. Don't let it get to that. We're heading into Thanksgiving Week and that's the perfect time to take stock of what you have and what you're thankful for. Be proactive and do it now.

That'll do it for this week, Folks. Thanks to Footballguys Clayton Gray, David Dodds, Keith Overton and Jake Bryant for the help on this one. If you've got a Random Shot of your own, shoot me an e-mail at bryant@footballguys.com.

Peace and Grace to you.