We save you time and help you win. You'll know who to start, sit, drop, add, and trade. Check out our In Season Discounts.

We save you time and help you win. You'll know who to start, sit, drop, add, and trade. Check out our In Season Discounts.

We do a lot of really insightful, thoughtful and serious features here at Footballguys with some very smart people thinking deeply for you. This is not one of those features.

This is a few pages of me downloading my goofy and dysfunctional mental hard drive that gets stuffed with way too many random items from too many hours watching, reading about and listening to football every weekend and throughout the week. It's the only way I keep relatively sane. Here's hoping it has a tiny bit of value for you. Let's go.

Note to Falcon Fans. This is why nobody give you any respect. New England limped into the Georgia Dome with no Gronkowski, no Amendola, and lost Vince Wilfork during the game. They trotted out LaGarrette Blount and a tight end named Mulligan and rolled out of your house with a win.

Houston, I'm talking to you too.

Here's what it's like to be a Giants Fan today. And a Chiefs Fan too. 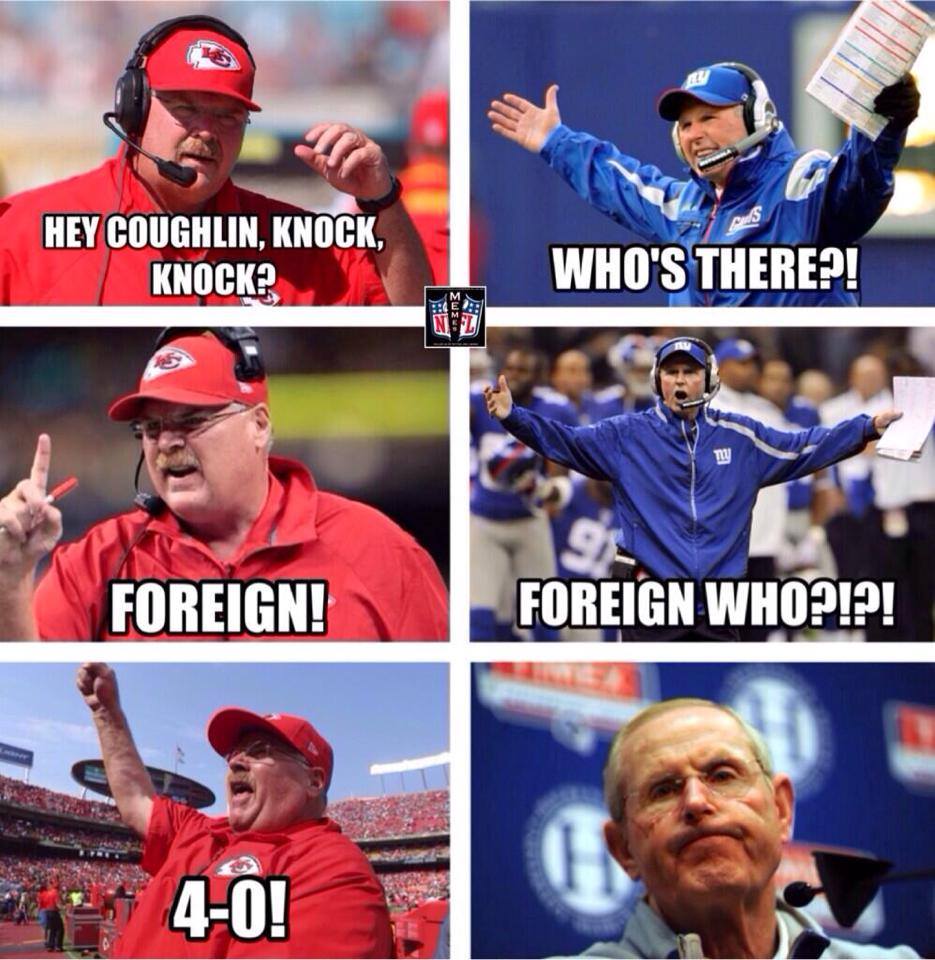 I've had lots of people ask where they can find the Smoking Ditka shirts. Check them out at BarstoolSports.com

San Francisco's Colin Kaepernick couldn't stop talking about how he loves to "favorite" negative tweets sent his way. For a guy who says he doesn't care what people think, he sure seems to spend a lot of time caring what people think.

I want to meet the marketing genius who sold the Golf Network on the "Big Break" show. I have minimal interest in watching the best players on the planet play golf. And I'm supposed to tune in to watch Mark Rypien hack it up in Puerto Rico? 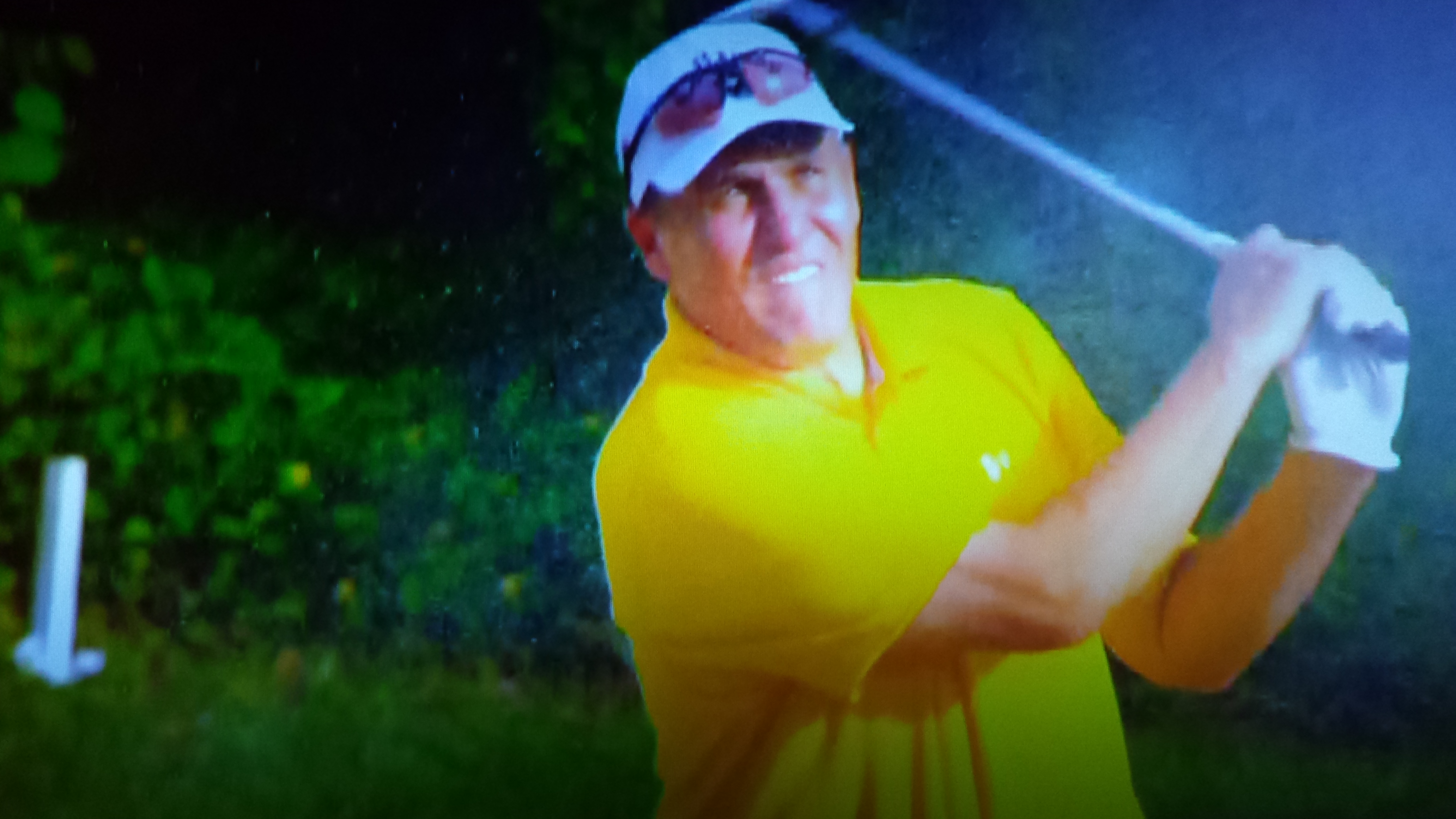 I know he's pretty good, but no thanks. 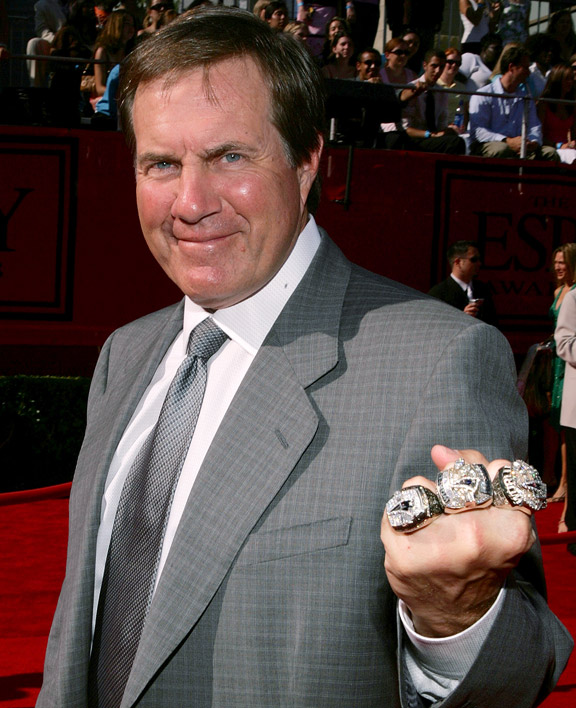 @CheapSeatFan with a nice one Sunday: "Ben Roethlisberger has probably been on the phone all morning trying to get Todd Haley the USC job."

We told you last week about Cardinals safety Rashad Johnson losing the tip of his finger in the Week 3 game. He was close to playing this past week after surgery and Cardinals coach Bruce Arians put the focus on his player saying it was a "pain tolerance" issue.

I hate that move. Keep that kind of thing private and don't put your player in a position like that where effectively you're questioning his toughness. I'm actually kind of surprised Arians went there.

Kent Somers of the Arizona Republic summed it up Sunday, "As the old saying goes, the coach has a high tolerance for the player's pain." Lame move by Arians.

and Todd from Breaking Bad in the same room? 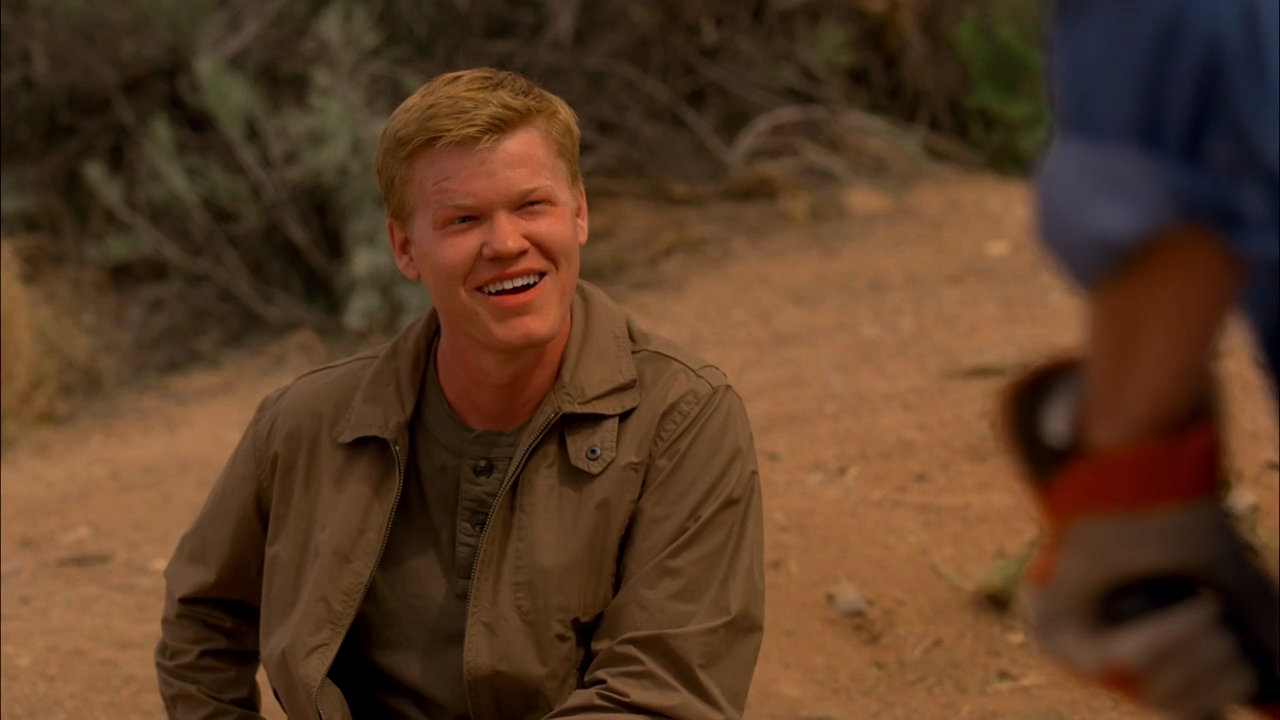 Just asking. Thanks to Footballguy Dan Molatore for that one.

Oakland's Darren McFadden left the game Sunday with an injury. The Fantasy Football world responded with this face. 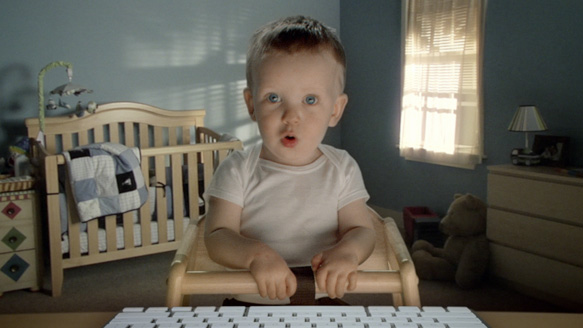 If you searched for "not a happy camper", I'm pretty sure this picture of J.J. Watt after the game would come up. 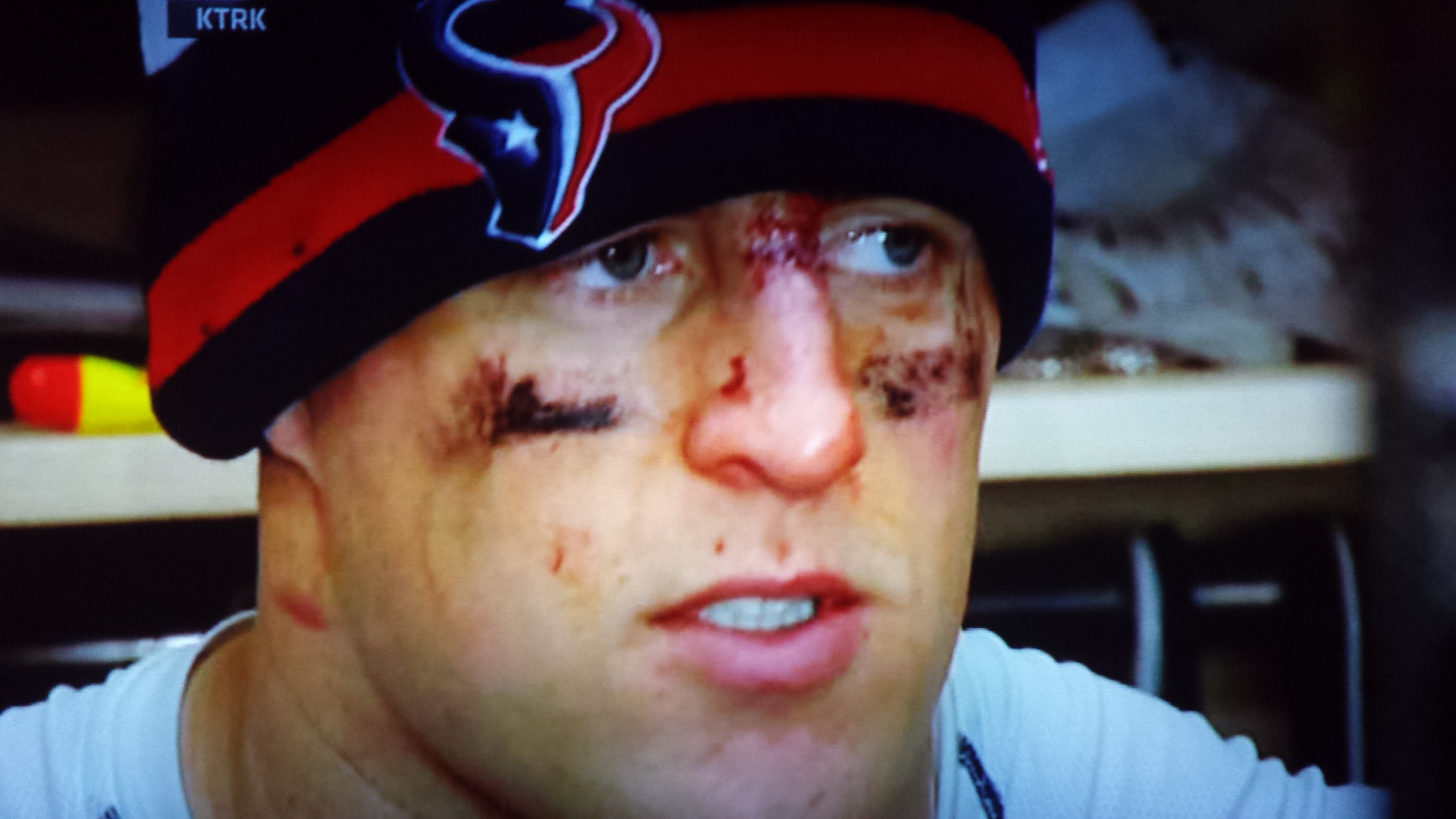 The Giants have been outscored 69-7 the last two weeks. Seriously? 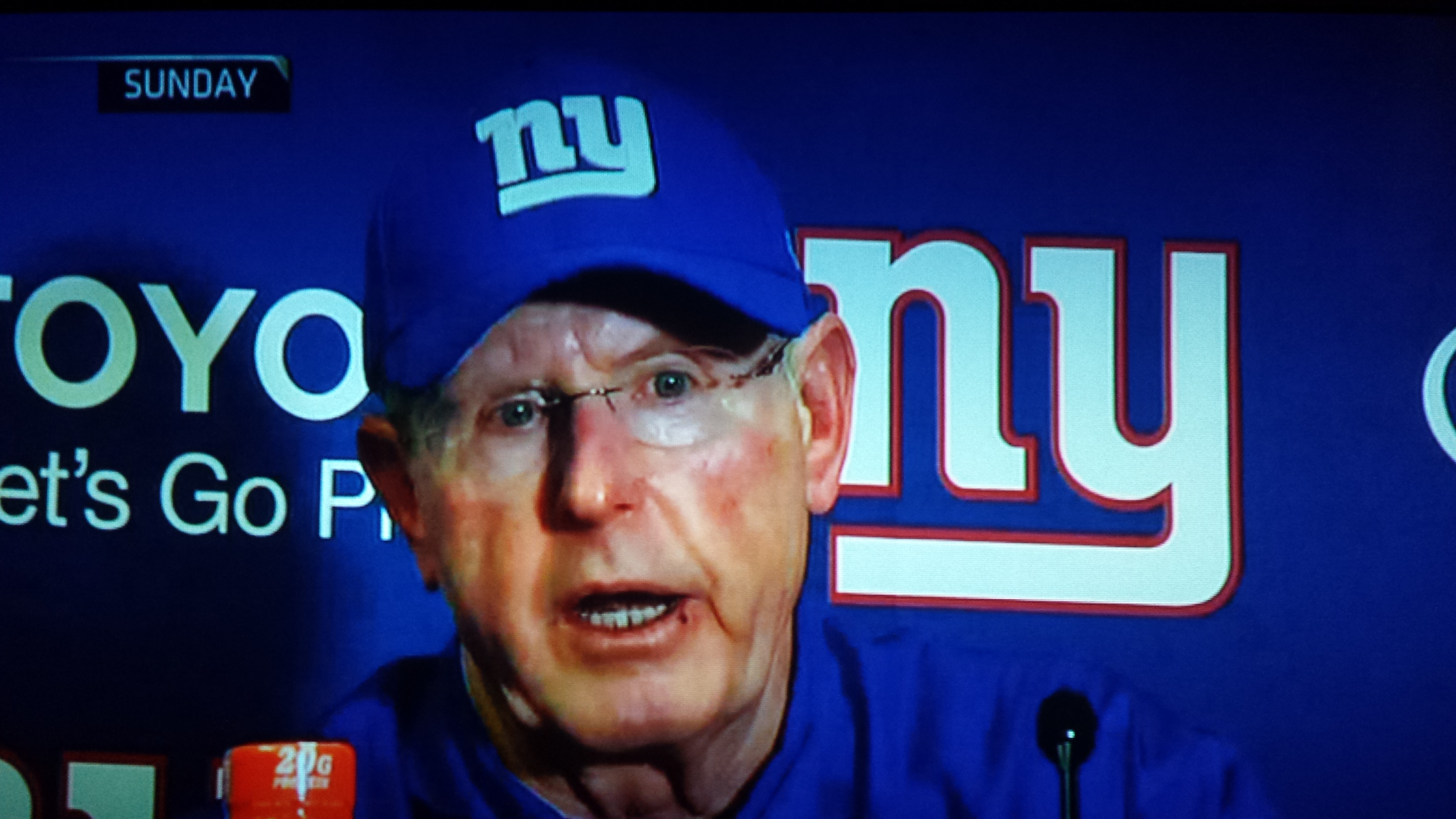 The Rams turn the lights out in the Edwards Jones Dome during pre game intros. I wonder what Jim Harbaugh thinks of that. 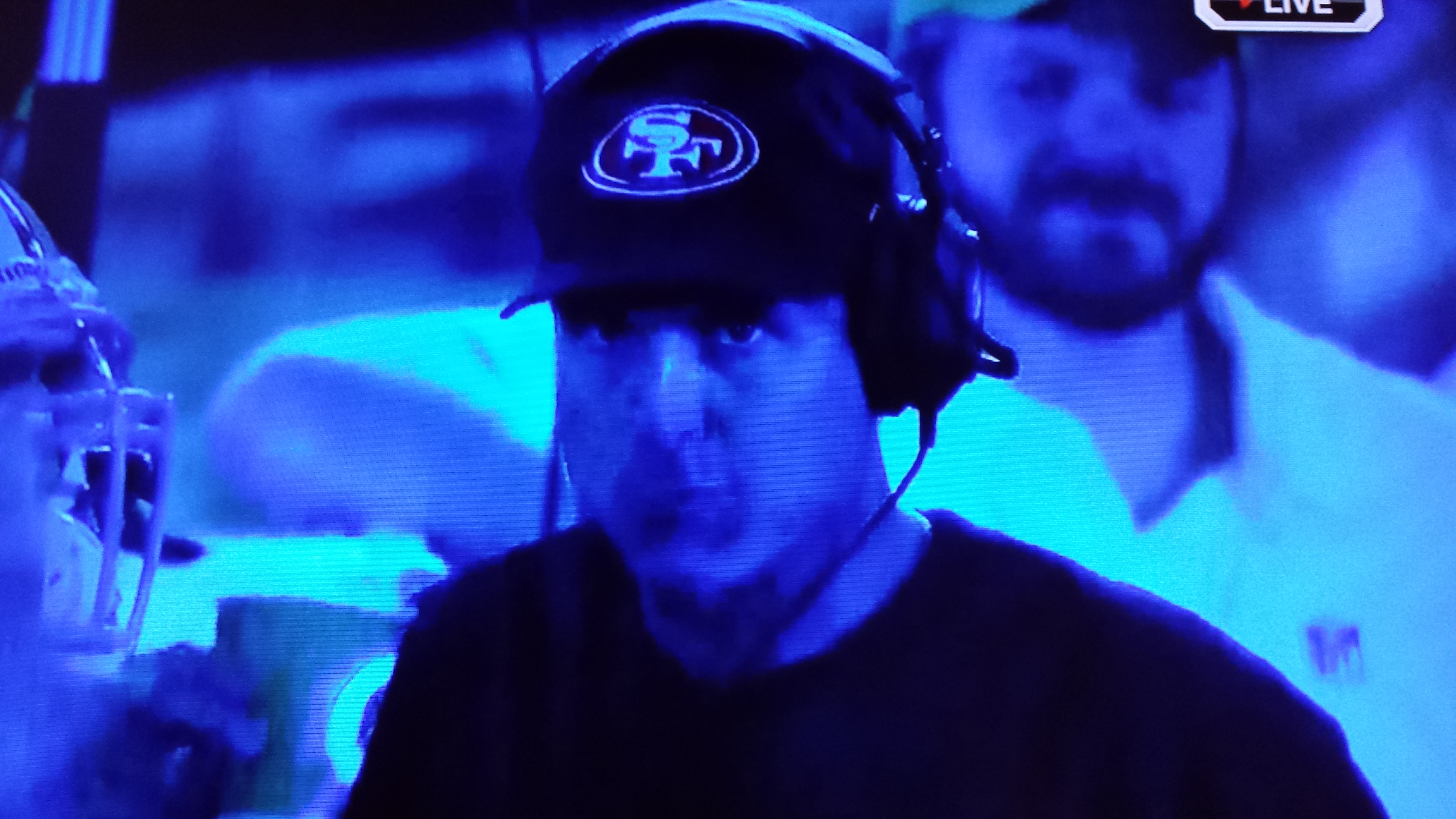 Ray Rice and Bryant McKinnie. This games takes all sizes… 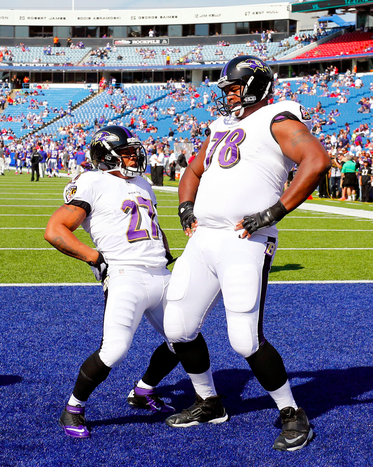 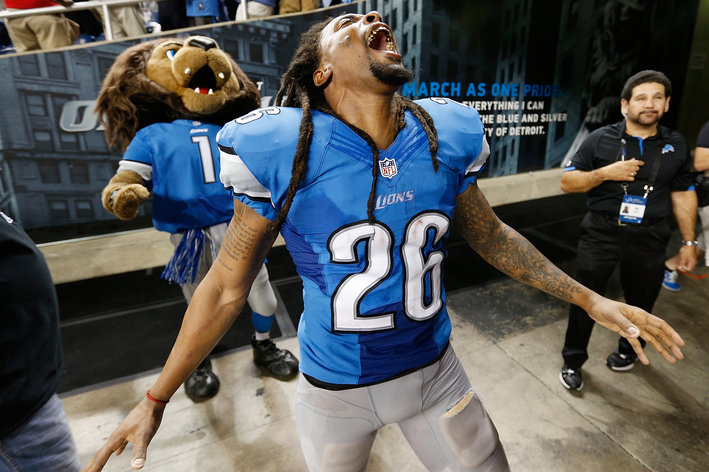 ESPN's Adam Schefter with a fascinating stat and a great example of how Championships mean everything. 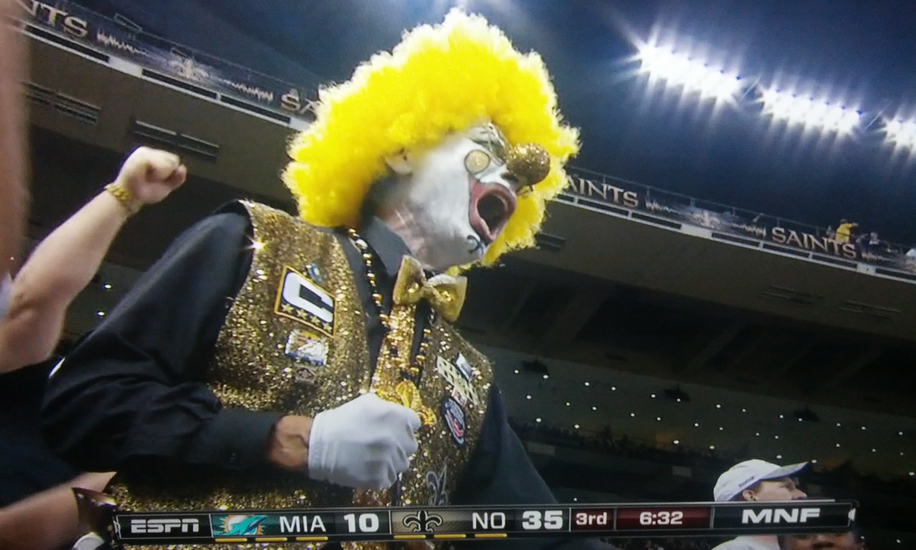 Thanks to Footballguy David Hultz for that one.

I'm not sure how many steps per yard the average running back takes. But I'm willing to wager Darren Sproles is pushing close to twice the average. Dude's feet are a blur.

Makes me think of the Road Runner. 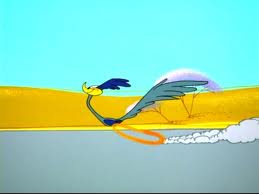 Always resourceful, defensive coordinators across the league are outfitting their players with new equipment… 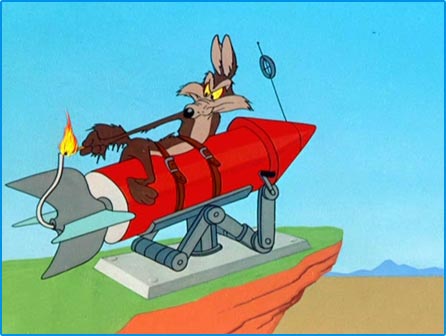 Stuff we shouldn't still have to say: Don't throw bottles at players.

The game was in Detroit but the bottle thrower was reportedly a Bears fan. 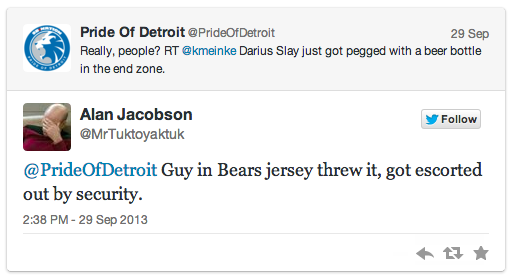 Regardless, don't throw bottles at players. It's not that difficult…

Brownie The Elf is an interesting mascot. 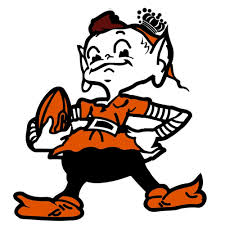 Still not sure how I feel about the new on the field version the team unveiled this week. 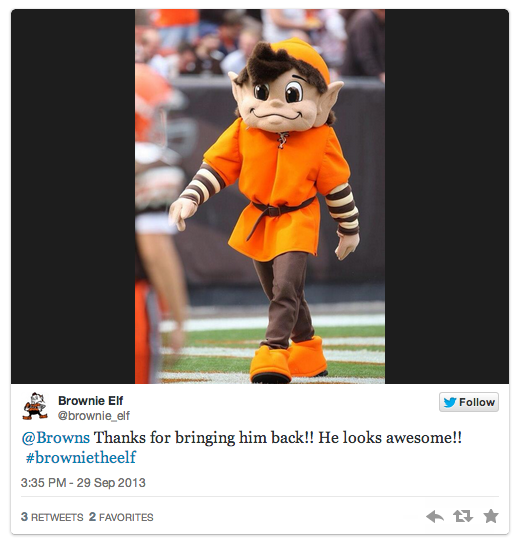 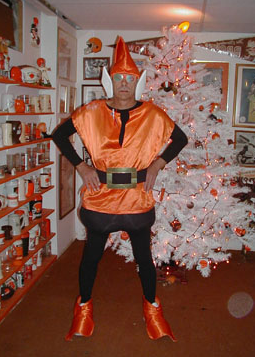 And for you guys that need to know everything, here's a nice history of Brownie.

While I'm on mascots and team logos - Max O'Brien is a graphic designer who re-imagined every team logo.

Here's his idea for New England. Click here to see the rest. 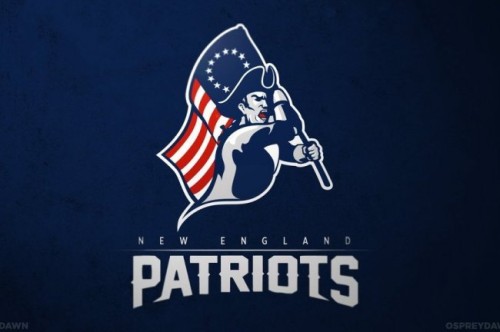 Do you like any of these better than the current logo? Let's hear it.

Tom Brady was all

While Sam Bradford was 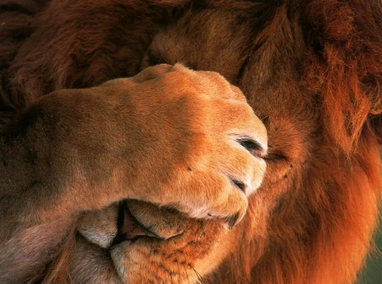 Thanks to Footballguy Mark DiRienzo for that one.

You may own Johnson or Martin, but at least you're not this guy.

Note to Jets rookie QB Geno Smith: It's cool and all that Mark Sanchez wants to help and you seem to be listening. But don't do everything he tells you…

When you've been in the league as long as Andy Reid has, you don't even have to throw the challenge flag to the ground...

Commercial of the week comes from Giorgio Armani and it's called The Ecstatic Beatbox. It's pretty much what you'd think from that title with the mouths of beautiful women doing a human beatbox thing. Guys stay glued to it. But the product they're selling is lipstick so I'm not sure how how that translates to actionable sales. If I ran the marketing department, I'd have the same ad selling Dodge Trucks. That'd be effective.

First it was Ray Rice and now it's Chris Johnson who's mad at Fantasy Football owners. 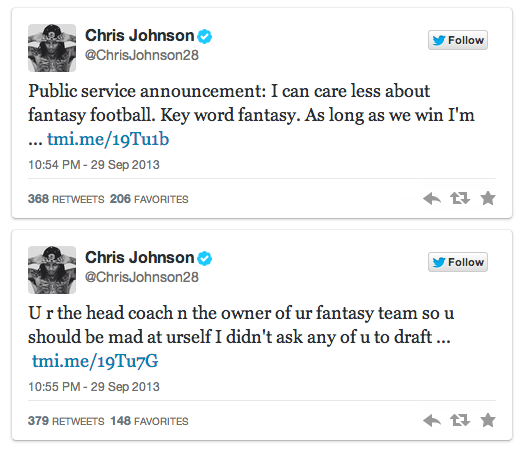 Just like with Rice, I can't imagine caring less about anything than I do Chris Johnson's opinion of Fantasy Football. You do your thing Chris. We'll do ours. All good.

Rock / Papers / Scissors-gate was fun last week in Denver with Ronnie Hillman saying the running backs played a quick game on the sidelines to determine who got the short yardage touchdown attempt and coach John Fox trying to say that wasn't true.

Knowshon Moreno had the truth for us after his touchdown Sunday…

If people had a "Happiness Meter", I'd bet Ram Man here has his pegged. 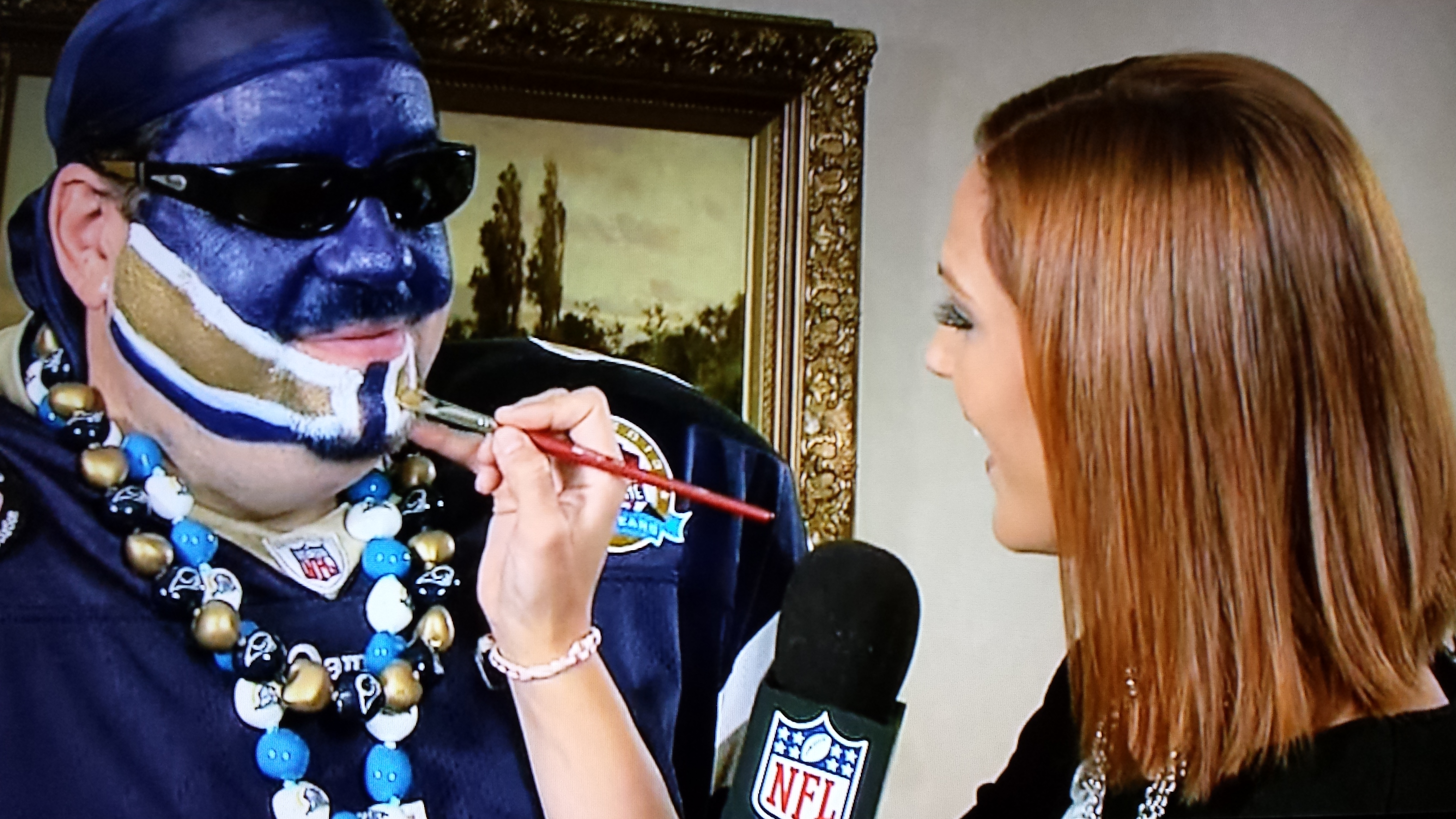 Note to Christian Ponder: I wouldn't be sinking any new money into my Minneapolis house.

I'm not sure how much I really believe that. It was mainly just a way to pull out the throwback Matt Cassel hat-fumble gif from Kansas City. I'm like that.

Steve Young said the most difficult thing to see Monday night would be Ryan Tannehill's "mustache" he'd been growing for three weeks. He said he wasn't shaving until they lost. So much for that. 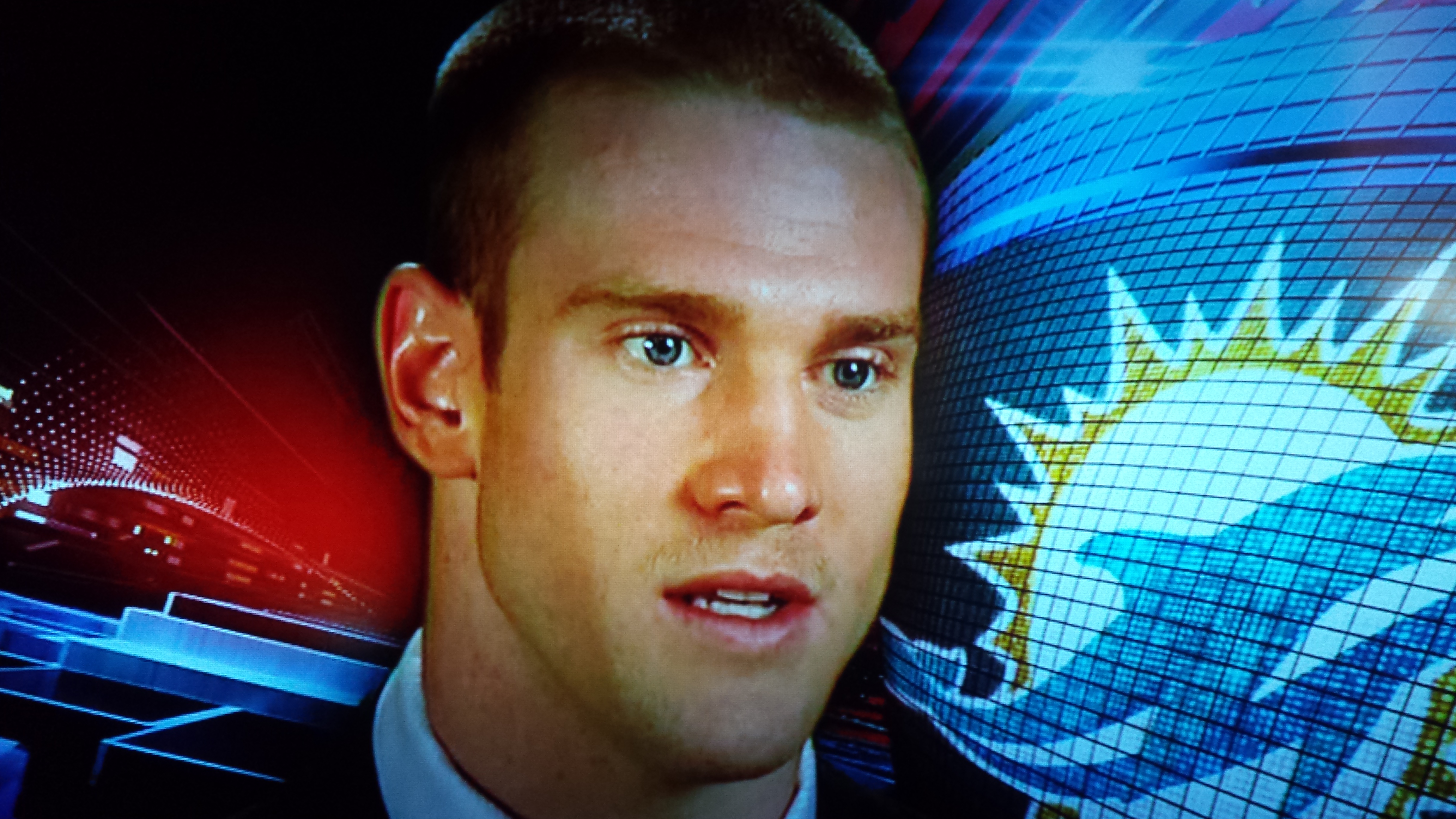 Now Jaxson DeVille is just showing off. After winning everyone's heart last week paying off the Seattle bet with a thong dance, he delivered again for the Colts game. The bet was that the loser would be shot with a number of paintballs equal to the total points scored. Jaxon took his 40 like a man…

He may be the best thing about the Jaguars.

You've seen the NFL Tickets "Gary" commercial painting a pretty rosy picture of how attending an NFL game is a stroll in the park. 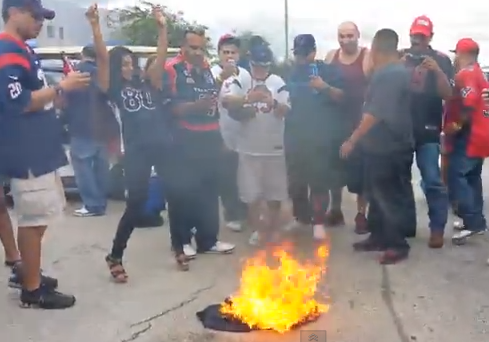 The Eagles put out this video before the Broncos game.

Non Football note of the week. If you're as tired of parents posting the "my kid is awesome" videos as I am, this one's for you. And I think it's pretty awesome. 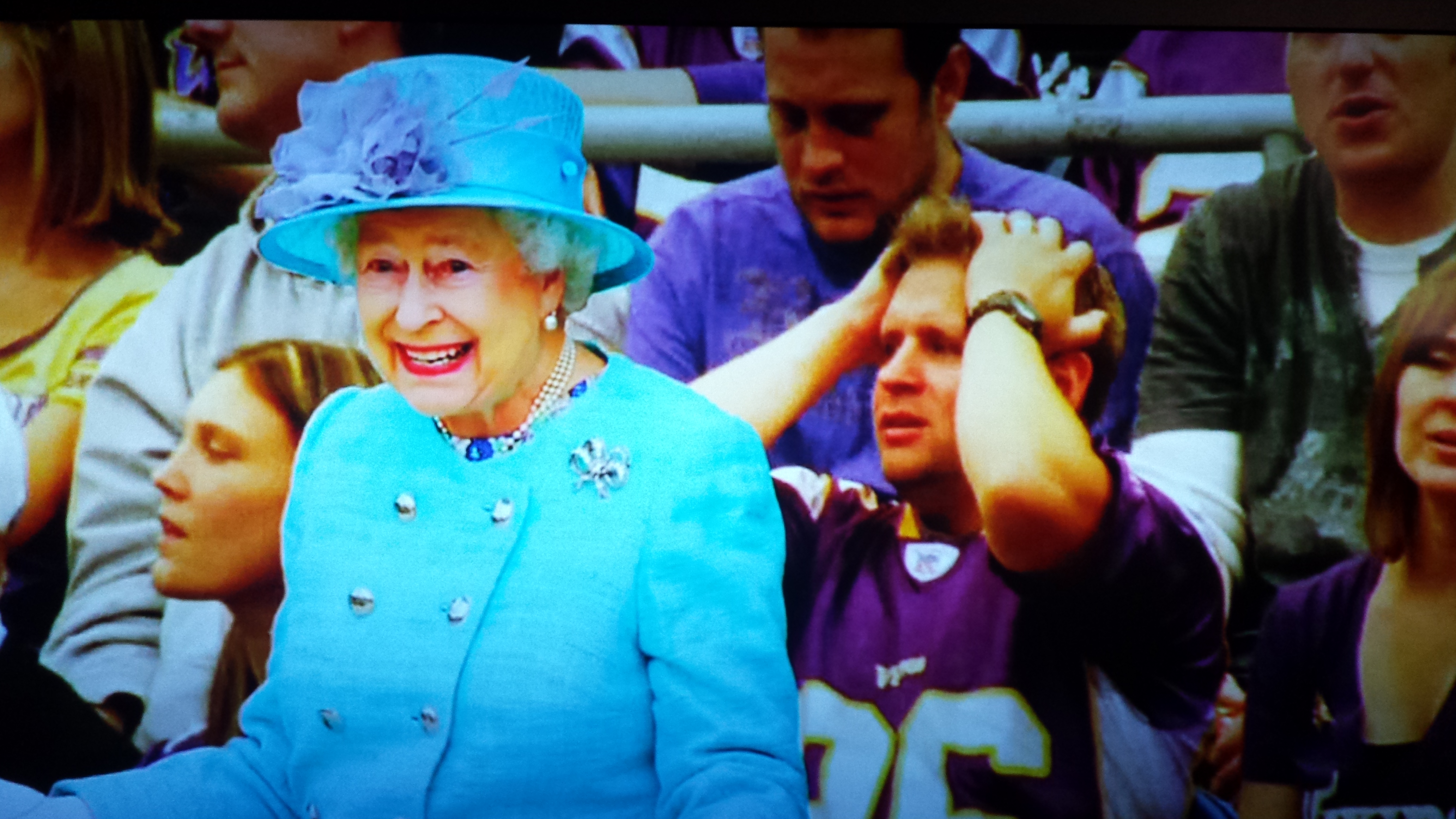 49ers tackle Joe Staley suffered what looked like a bad knee injury Thursday night but wound up being ok. He posted this tweet after the game. 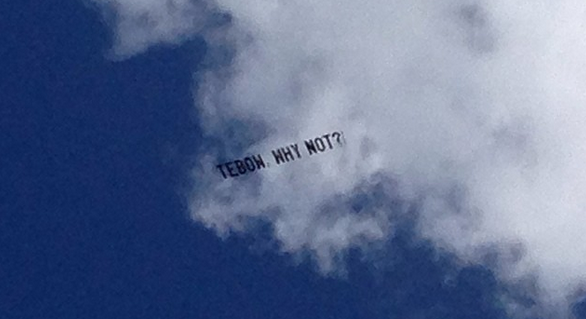 Ok, that wasn't God. That was an airplane pulling a banner. 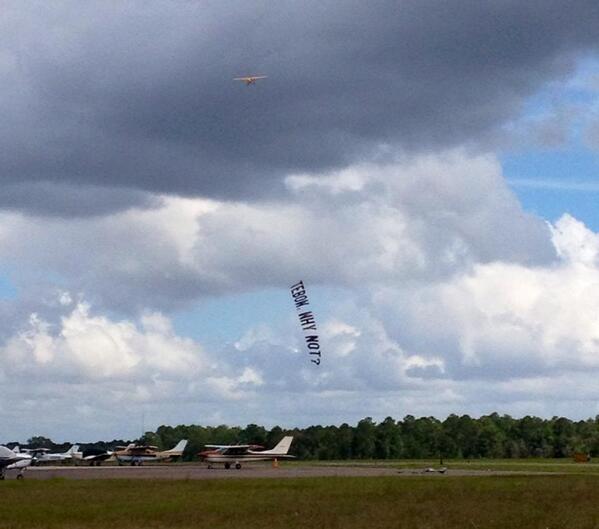 But seriously. "Tim Tebow - Why Not?" You spend several hundred dollars on a banner and no telling how much to hire the airplane and "Why Not?" is the most persuasive argument you can muster there? 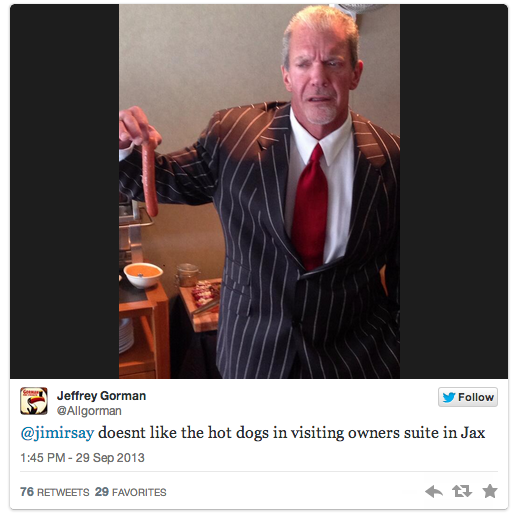 I told you last week I was still mentally 12…

Patriots owner Bob Kraft shows he's still down with it.

I'd love to know what Floyd Mayweather was thinking right then.

And I wonder if Gordon Gekko knows Mr. Kraft raids his closet.

If I were Bob Kraft, I'd so have one of these phones. 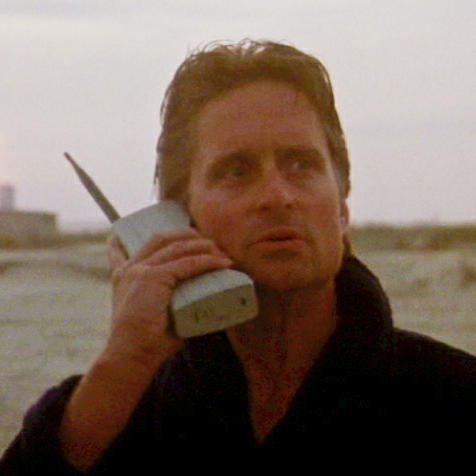 Music note of the week. Regular readers know The Avett Brothers are one of my favorite bands. They've got a new album out October 15 called the Magpie and the Dandelion. Another Is Waiting is a great sounding new single from the album.

For a couple more tunes, Salvation Song is great and if you had to pick one song for me that sums up the Avett's energy, it would be I Killed Sally's Lover with Seth Avett kicking the cymbal at the end of the song. And if you want a really raw version of that song, here's a screaming alt version performed at our local Knoxville record store a few years back with Scott Avett losing his mind at the end. I told you I'd do something thrashy this week…

Go see these guys if you haven't yet.

Here's a Hard Luck picture for anyone who lost by a touchdown to a team with Anquan Boldin. You were this close… 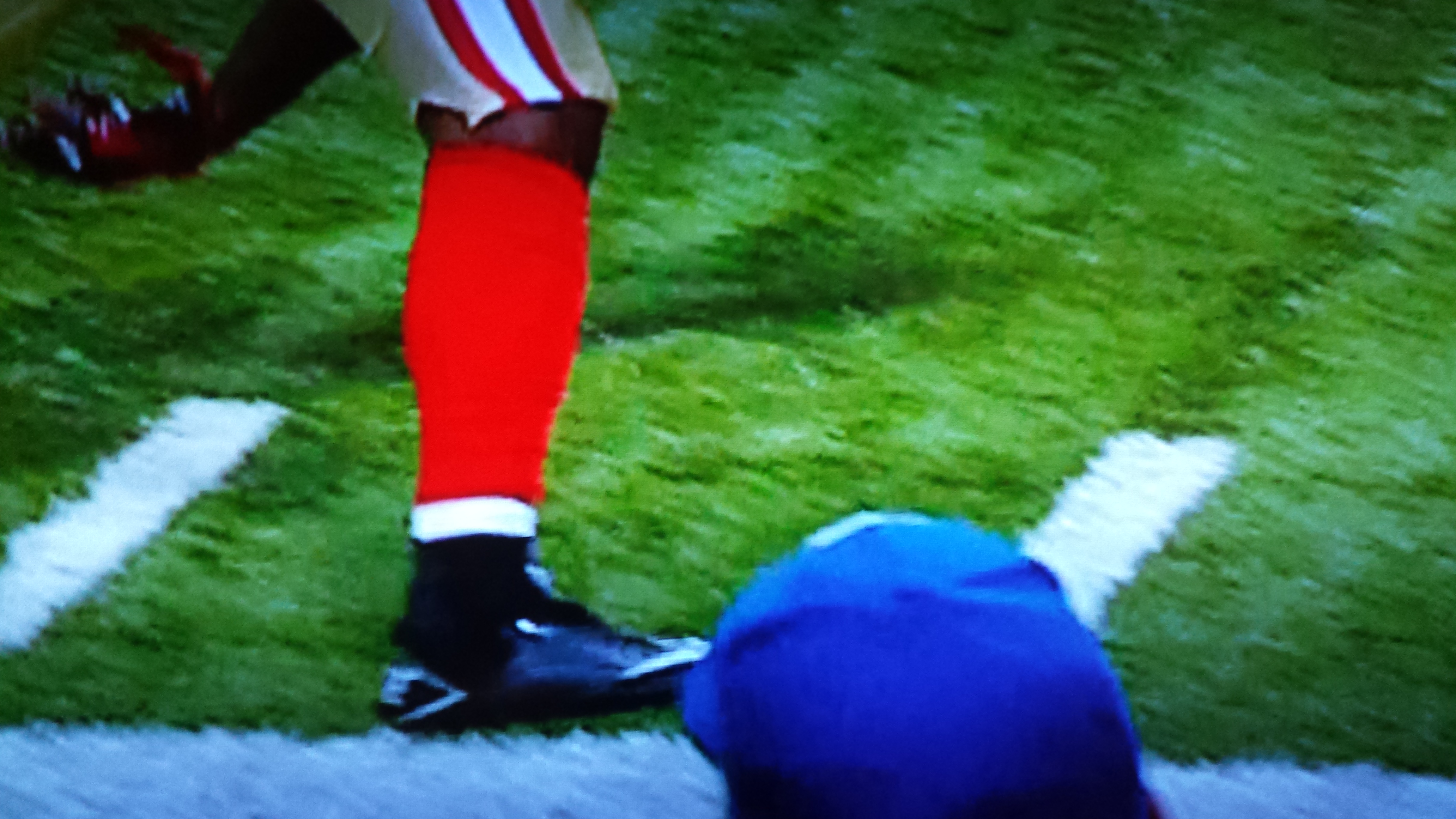 Sometimes it's better to just not know...

That'll do it for this week, Folks. Thanks to Footballguy Doug Drinen, David Hultz, Mark DiRienzo and Dan Molatore for the help on this one. If you've got a Random Shot of your own, shoot me an e-mail at bryant@footballguys.com.

Note for you folks inclined to pray or those that care enough to read all the way down this far. This season of Random Shots is dedicated to my close friend Mike Wenger who apparently has decided to upstage Chuck Pagano this year. Mike's been diagnosed with Acute Myeloid Leukemia and is undergoing aggressive chemotherapy. Much Love, Buddy. Mad Respect. Go Chiefs.

A ton of you folks have been so kind to reach out with nice comments for Mike. I wanted to let you know that we've got a cool fund raiser we're doing for the family where our good friends at Slantshirts.com have printed up MIKESTRONG shirts for us.

Click Here to order. Profits from the shirt sales will be donated to the Wenger family to help offset bills. Plus there are lots more cool shirts on Slantshirts.com . Much thanks.